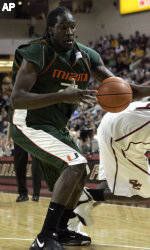 Marshall finished with 20 points and Jared Dudley scored 18 for BC (13-4, 5-0 Atlantic Coast Conference), which won its fourth straight game since he returned from a foot injury and sixth in a row overall. Tyrese Rice had 16 points and a career-high 12 assists, and Shamari Spears scored nine with 10 rebounds.

Dwayne Collins scored a season-high 24 points and added 13 rebounds as Miami (9-10, 2-3) lost for the sixth time in eight games. He was the only Hurricanes player to make more than half his shots as they shot 28 percent in the first half and fell behind 42-22 at the break.

Jack McClinton made Miami’s first 3-point attempt of the game to give the ‘Canes a 9-5 lead, but they missed their next 12 tries from beyond the arc. Meanwhile, BC outscored them 33-11 – 11 of the points from Dudley, including back-to-back 3-pointers that gave the Eagles a double-digit lead they never relinquished.

New BC football coach Jeff Jagodzinski was introduced during a first-half timeout and received a tremendous standing ovation. After the school fight song, “For Boston,” the former Green Bay Packers offensive coordinator took the microphone and said, “This is a great place, and I’m proud to be your football coach. We’re going to go get it done.”