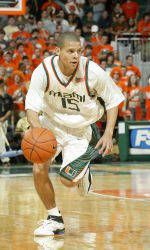 Steve Proctor finished with 20 points as the Bearcats (6-4) won for the first time against an Atlantic Coast Conference opponent in school history.

Binghamton limited Miami’s leading scorer Jack McClinton to three first-half points. McClinton, who leads the ACC in scoring with a 19.8 average, converted only a 3-pointer 8:47 into the game.

McClinton and Denis Clemente each finished with 17 points to lead Miami (7-5).

After leading most of the first half with slim leads, the Bearcats went on a 12-4 run during a 4:51 span early in the second half to build a 50-41 advantage.

Forbes’ field goal put Binghamton ahead for good, 71-68, with 3:02 remaining. Proctor and Troy Hailey secured the victory, each converting two free throws in the final 20 seconds.

The Bearcats led 36-33 at halftime after Forbes sunk a 3-pointer with 4.6 seconds remaining in the first half.