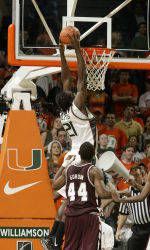 Stewart hit five 3-pointers as Mississippi State (6-2) made 10 as a team to earn their first road win of the season. Richard Delk added 14 and Jamont Gordon had 12 points, eight assists, and six rebounds.

Miami (6-4) was led by Jack McClinton who failed to extend his 20-or-more- point streak to seven games as he finished with 16 points. Dwayne Collins finished with 14 points, six rebounds, and five blocks.

Mississippi State never trailed in the game and led 39-22 at halftime.

Miami fought back in the second half trimming the lead down to six points with 13 minutes left.

Mississippi State countered with a 12-2 run and never looked back. The 18-point loss for Miami was their largest home defeat since February 1994 when they lost 88-60 to Providence.