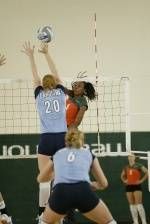 Outside hitter Frannie Savage posted her fourth double-double on the season after registering 10 kills and 14 digs. This is the senior’s second consecutive double-double for the weekend.

Eight tied scores were posted before a kill off of Angelica Ellis put Miami in the lead at 16-15, and the Hurricanes cruised along to a 30-23 win in game one. A service ace from Robinson put UM up 26-19 that sent the Wolfpack to the bench to take a timeout. Match point 29-22 with Miami ahead, was a result of an attack error off of N.C State’s Kelly Blakewood. However, a service error off of Miami’s Michelle Bruin kept the Wolfpack in the game putting the score at 29-23. The final set came off of a kill by the Hurricanes’ libero, Cassie Loessberg as Miami headed to the bench with a 1-0 game lead.

In game two, the Hurricanes took an early 20-12 lead after a kill by Frannie Savage. From there the Miami posted a service error, as the Wolfpack registered two service errors and a kill, sending them on a four-point run and sending Miami to the bench with their first timeout with the score at 20-16. The Hurricanes maintained the lead as N.C. State rallied to put the score within two at 20-22 from a kill by Janay Yancey. At 25-20, the Wolfpack’s next two points came off of two Miami errors putting the score within three at 25-22. But a kill by Loessberg sparked a five-point run as Miami forced the Wolfpack to drop three attack errors, and a service ace by Loessberg gave the Hurricanes a 30-22 win.

After an attack error off the Wolfpack’s Kelly Blakewood put Miami in the lead 15-10, N.C. State headed to the sideline for their first timeout. But a three-point run by the Wolfpack, sent the Hurricanes to take a timeout of their own with the score 15-13. After Ciara Michel posted a kill putting the Hurricanes up 20-17, Miami went on to put up four additional points with kills from Savage and another by Michel, along with two attack errors by the Wolfpack with the score 24-17. N.C. State managed to put the score within two at 24-26 sending Miami to take their final timeout. Miami captured the 29-25 match-point advantage from a kill off of Angelica Ellis, followed by a service error to keep the Wolfpack in the game at 29-26. But it was Michel who put up the final kill to send Miami packing with the 30-26 game-win and the match-victory.

The Hurricanes will play their final two matches of the regular season this week as they face Wake Forest Wednesday, November 22 at 7:00 p.m., and Duke Friday, November 24 at 12:00 p.m.