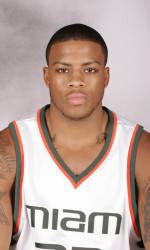 Miami went on a 19-0 run in the first half and held Alcorn State without a field goal for 12 minutes.

The Hurricanes took a 51-25 into halftime. Alcorn State (0-3) missed 15 consecutive shots before Delvin Thompson made a layup at the 17:33 mark of the second half.

Miami shot 52 percent from the floor while holding Alcorn State to 34-percent.

Thompson came into the game averaging 21 points per game for the Braves and finished with 13 to lead the team.