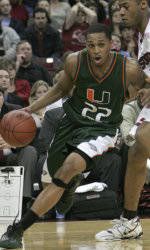 Miami overcame a 56-44 deficit with 6 minutes left in regulation and sank late baskets to force both overtimes. But Ilian Evtimov’s 3-pointer to start the second extra period put the 16th-ranked Wolfpack ahead to stay, and they sank six consecutive free throws to close out the win.

Cameron Bennerman scored 23 points for the Wolfpack, who survived a 1-for-9 drought during an 11 1/2-minute stretch after halftime.

The result snapped a three-game winning streak for the Hurricanes (14-9, 6-4). They fell to 2-5 against ranked teams and face Top 25 teams in their next three games.

The Wolfpack sank 11 3-pointers in the first 28 minutes, then went 17 1/2 minutes without one until Evtimov put them up 78-75 to start the second overtime.

A basket by Cedric Simmons made it 80-75. Engin Atsur, Simmons and Bennerman then made two free throws each for North Carolina State, which finished 22-for-25 at the line.

North Carolina State made eight consecutive free throws before Atsur missed the first of two attempts with 18 seconds left in regulation. Diaz’s driving layup with 9.8 seconds to go tied the score at 65, and Miami’s Anthony King blocked a shot by Simmons to force overtime.

Harris was the first to score in the extra period, sinking a driving bank shot to give the Hurricanes their first lead since 2-0.

Diaz sank a 3-pointer to tie it at 73 with 1:16 left in the first overtime. Bennerman banked in a shot for the Wolfpack, and King tied the game again by sinking a follow with 24 seconds to go, forcing a second overtime at 75-all.

Miami started the game in a zone defense, and the Wolfpack raced to a 15-8 lead, making four 3-pointers in the opening 4 minutes. Even when the Hurricanes switched to man-to-man, North Carolina State kept hitting from outside, finishing the first half 9-for-16 on 3-pointers for a 36-25 advantage.

Andrew Brackman’s lone 3-pointer made it 41-28. Grant’s first – and seventh of the season – gave the Wolfpack their biggest lead at 51-36.

The Hurricanes had 12 turnovers in the opening half. One led to a breakaway dunk by Simmons that left the basket shaking for 20 seconds.

A 38-31 edge in rebounding wasn’t enough for the Hurricanes. On one possession they grabbed five offensive rebounds – but still failed to score.