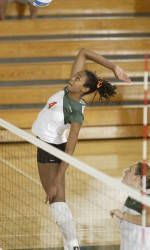 CORAL GABLES, <?xml:namespace prefix=”st1″ ns=”urn:schemas-microsoft-com:office:smarttags”?>Fla. – Redshirt-junior Francheska Savage knocked down seven of her match-high 21 kills in the final game but the University of Miami volleyball team could not stop Virginia from claiming a 3-1 (26-30, 31-33, 30-21, 28-30) victory Friday evening at the Knight Sports Complex. <?xml:namespace prefix=”o” ns=”urn:schemas-microsoft-com:office:office”?>

“We just gave up too many big runs to them and we didn’t side out quickly enough; that was what hurt us in game four,” said head coach Nicole Lantagne Welch. “It all comes down to a couple little plays, little adjustments that we want to make quicker within the match.”

“Frannie was exceptional. In whatever role we put her in, she was just putting the ball away,” added Lantagne Welch.

Both teams exchanged points to open up the match but a Virginia kill and a Miami error gave the Cavaliers a 6-4 lead. The Cavaliers kept a comfortable distance for most of the game until the Hurricanes pulled to within four points with Virginia leading 28-24. Miami capitalized on two Cavalier miscues to bring the score to 28-26 but the Hurricanes could not catch-up as Virginia claimed a 30-26 game one victory.

Game two was the closest of the match as the teams changed leads seven times and tied the score on 17 occasions. There was a back-and-forth battle for the lead at the start of the match before Virginia pulled ahead. The then went on a six point run to take an 18-19 lead. The teams once again took turns leading until Miami got on top with three consecutive kills to force a Virginia timeout with the score 27-26 in Miami’s favor. Up 28-26, Miami could not keep the Cavaliers at bay as they tied the score four times before finally taking the 31-33 win and a 2-0 match lead into the locker room.

Though the Cavaliers got on the board first in the third game, Miami registered seven-straight points for an 8-4 lead. Virginia went on a three point run of its own before Miami used three kills and a Johnson service ace to pull ahead 16-10. The Hurricanes never relinquished their lead, holding the Cavaliers to a .171 attacking percentage and forced eight errors en route to a 30-21 victory.

Game four saw Virginia take an early 6-3 lead before back-to-back Ciara Michel kills pulled the Hurricanes to within one point. The Hurricanes could not take the lead, however, as the Cavaliers pushed ahead 13-9. Both teams took turns with the lead for a portion of the game before two consecutive Virginia service aces brought the score to 21-19 in favor of the Cavaliers. Virginia, up 28-20, was two points shy of claiming the match but a late Hurricane surge, led by Savage, kept the game alive. Miami registered seven straight points, thanks in large part to three consecutive kills by Savage, to cut down Virginia’s lead to three. Now at game point, Savage and Johnson both knocked down a kill apiece for a 29-28 Virginia lead but the Cavaliers managed to let another kill drop to end the threat and take the game, 30-28, for the match victory.

Savage went 7-of-11 and committed only one error for a .545 hitting percentage in game four.

The Cavaliers had five players post double-digit kills and were led by Sarah Kirkwood, who posted 17 kills and 17 digs.

The Hurricanes return to action Sunday when they square off against Virginia Tech. Match time at the Knight Sports Complex is set for 2:00 p.m.