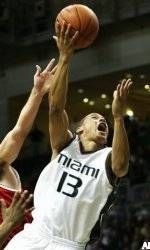 Hurricanes Take Down The Terrapins in OT

CORAL GABLES, Fla. (AP) – Will Frisby made a pair of free throws with 0.8 seconds left in overtime to lift Miami past No. 22 Maryland 75-73 on Saturday.

It was the first win in three games for Miami (14-7, 5-5 Atlantic Coast Conference), which led for nearly the entire game but had to rally at the end of regulation and in the final second of overtime. Guillermo Diaz scored 27 points to pace the Hurricanes.

Maryland (13-7, 4-5) lost its second consecutive game after a pair of wins over Duke and Georgia Tech.

Miami trailed for just 27 seconds of the first half, and maintained its lead until Chris McCray made a 3-pointer from the right wing to give Maryland a 60-57 lead with 6:07 remaining.

McCray led Maryland with 23 points, including 20 in the second half and overtime. Mike Jones, who scored 14, was the only other Maryland player in double figures.

Maryland held the lead until 2:58, when Diaz made a 3-pointer to put Miami up 64-62. But the Terrapins went back in front just over a minute later when John Gilchrist’s 3-pointer gave them a 65-64 lead with 1:44 remaining.

Diaz bailed the Hurricanes out again, blowing past two defenders for a layup and a 66-65 lead at 1:17.

Maryland called a timeout, and Gilchrist missed a long 3-pointer that was rebounded by Miami’s Robert Hite with 45 seconds left.

The Hurricanes let the game clock wind down to 18 seconds before Diaz missed a deep 3-pointer. But Anthony King snared the rebound, and was fouled by Will Bowers with 15.3 seconds remaining.

King missed the first free throw but made the second, giving Miami a 67-65 lead. But the Hurricanes allowed Travis Garrison to get a rebound of a miss by Gilchrist on the other end, and the junior forward made both free throws to tie the game at 67 with 3.9 seconds left.

Diaz took the inbound pass and made a desperate runner from NBA 3-point range, but failed to get the shot off before the buzzer.

In overtime, Diaz scored Miami’s first four points to give the Hurricanes a 71-69 lead. Frisby had a chance to put Miami up 75-70, but missed a dunk attempt at 1:28.

But Caner-Medley was called for an offensive foul after knocking Frisby to the floor. Hite missed a short jumper with 3 seconds to go, but Frisby grabbed the rebound and was fouled by Jones with 0.8 seconds left.

Frisby made both free throws, and McCray failed to get a desperation 3-pointer off before the final buzzer.