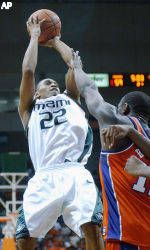 In a back-and-forth game, Clemson had a shot to tie or take the lead withless than 30 seconds left after two missed free throws by Miami’s Eric Wilkinsleft the score at 67-65.

But Olu Babalola and Shawan Robinson misfired on a pair of wild shotattempts on the ensuing possession and Robinson landed out of bounds aftergrabbing his own miss with 5 seconds, giving the ball back to Miami (13-5, 4-3Atlantic Coast Conference).

Hamilton, a 40 percent free throw shooter coming in, was fouled on theinbounds and hit both shots to ice the game, the fourth straight loss for theTigers (10-9, 1-6) and their sixth loss in seven games.

Hite, who had scored 12 points in Miami’s previous two games, scored 12points in the second half, including six over the final 7:45.

Sharrod Ford scored 20 points and grabbed 16 rebounds to lead Clemson, whoalso got 11 points from Cliff Hammonds and 10 from Akin Akingbala.

Anthony Harris had 15 points for the Hurricanes, while Guillermo Diazfinished with 12 points and Will Frisby added 11.

The Hurricanes led for most of the first half, but Clemson closed the finalfive minutes on a 12-5 run to take a 31-27 halftime lead.

Hite and Harris helped Miami get back on track in the second half, combiningto score 18 of the Hurricanes’ first 20 points after the break. Harris scored12 of his 15 points on over the first 8:21 of the second half.

Miami took a 55-50 lead on a Harris 3-pointer and Frisby’s dunk with 8:38left as the Hurricanes tried to pull away, but Clemson answered with five quickpoints of its own to tie the game again.