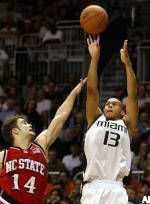 A potential game-winning 3-pointer by the Wolfpack’s Cameron Bennermanbounced off the side of the backboard with 1 second left.

Anthony King converted a three-point play to put the Hurricanes ahead tostay, 63-61 with 2:36 to go.

Diaz, who has scored 53 points in Miami’s first two league games, missed hisfirst four shots and went scoreless over the first 11 minutes. But he finished5-for-9 from 3-point range and made two free throws with 23 seconds left to putthe Hurricanes ahead 67-63.

Engin Atsur’s 3-pointer made it 67-66, and Diaz missed the front end of a1-and-1 to give the Wolfpack the last shot. After a timeout, Ilian Evtimovdrove the lane and fed Bennerman, who badly misfired under pressure.

Robert Hite scored 19 points for the Hurricanes, whose victory delighted acrowd of 6,067, the first home sellout for Miami in two years.

Julius Hodge, back in the Wolfpack lineup after missing one game with asprained ankle, had 12 rebounds but just 14 points, five below his average. Hewent only 4-for-10 from the free-throw line and missed a 15-foot shot thatwould have tied the game with a minute left.

Facing a Miami zone, the Wolfpack hit four consecutive 3-point shots -including three by Brackman – for a 14-10 lead.

The Hurricanes missed nine straight shots and fell behind 20-10, the secondtime in a row they’ve fallen behind by double digits in the opening half. Themargin reached 29-17 before Diaz scored eight straight points to start a 12-0run that tied the score.

Diaz’s 3-pointer with 2 seconds left made the score 34-all at halftime.

The Wolfpack took a 61-57 lead by running off eight consecutive points,including a layup by Hodge that put them ahead.

The Hurricanes answered with eight straight points of their own. A bad passby Evtimov triggered a Miami fast break, leading to a layup by Hite that madeit 65-61 with 2:17 to go.