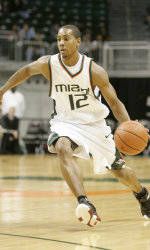 Miami (7-2) started out sluggish for the second consecutive game, trailing22-17 before closing the first half on a 12-5 run. Hite scored 10 of Miami’s 29points and added four of his game-high five steals in the first half.

The Golden Eagles never got closer than five points off the Hurricanes’ leadafter that, and three consecutive Miami 3-pointers, including two by Hite,pushed the lead to 62-52 with 3:06 remaining.

Four of five starters finished in double figures in scoring for Miami, whichovercame 39.3 percent shooting by beating Tennessee Tech 45-34 in rebounds.Miami missed 16-of-21 3-pointers, while 10 of Tennessee Tech’s 21 field goalscame from 3-point territory.