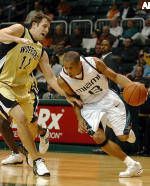 Wofford pulled to within one point at 63-62 on an Adrien Borders 3-pointerwith 4:10 left in the game and cut Miami’s lead to 65-64 on a reverse layup byHoward Wilkerson with 2:11 remaining.

Backup point guard Brandon Okpalobi hit a twisting layup with 1:20 left topush the Hurricanes lead to 67-64, but missed a wide-open layup with 22 secondsremaining.

Wofford guard Drew Gibson’s 3-point attempt caromed in and out, and King wasfouled by Wilkerson.

King’s miss from the free throw line with 14 seconds left gave the Terriersone more shot to tie the game, but Eric Marshall missed from the left corner.

King recorded the highest rebounding total by a Miami player since therebirth of the program in 1985-86. Gary Hamilton also had 15 rebounds for theHurricanes, who were led by Guillermo Diaz’s 13 points.

Wilkerson led the Terriers with 23 points and nine rebounds.

Miami took a hit when starting point guard Anthony Harris injured his rightleg on a shot attempt. Harris limped to the bench before being escorted to thelocker room with just under 6 minutes remaining.