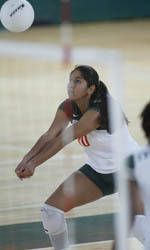 The Hurricanes were held to a season low .144 hitting percentage while the Tigers (16-9, 6-5 ACC) hit .286 as a team. The match marks only the second time this season that the Hurricanes lost a match in three games.

Senior Valeria Tipiana posted her seventh double-double of the season with 10 kills and 11 digs while junior Karla Johnson hit a team-high 11 kills. Redshirt freshman Ciara Michel posted the Hurricanes’ only solo block of the night.

Game one proved to be the closest game of the match with Miami leading by one point, but the Tigers came back to score four of the last five points to take the 30-28 win. The Hurricanes posted a .317 hitting percentage as opposed to Clemson’s .273 but could not capitalize on the Tigers’ six attacking errors.

The Tigers jumped to a quick 16-6 start in game two that they never relinquished. The Hurricanes were held to a match-low .019 hitting percentage. Errors were the tale of the tape for Miami who posted a match-high 12 errors in the 30-17 loss.

The Hurricanes faced a fired-up Clemson squad in game three. The Tigers extended their lead to 25-20 late in the game to carry the momentum and take a 30-25 win and the match.

For Clemson, senior Leslie Finn led all players with 24 kills, 17 digs and a .477 hitting percentage.