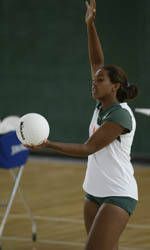 “This was a great match. I am extremely proud of the team,” said head coach Nicole Lantagne Welch. “We knew that this would be a huge test and that they would be very strong opposition. I was very pleased with the way that we fought to win the match.”

Seniors Valeria Tipiana and Elizabeth Tyson along with, sophomore Jill Robinson posted double-doubles in the four-game match. Tipiana tallied 19 kills, 10 digs, six assists and four block. Tyson registered a season high 18 kills, 10 digs and two of the Hurricanes four service aces, to go along with her three blocks. Robinson matched her career-mark for the third time this season when she dished out 67 assists as well as tallied 15 digs.

“Elizabeth Tyson came off the bench and was exceptional off the attack,” noted Lantagne Welch.

Both teams fought for the lead in game one with neither team leading by more than three points. With the score tied at 10, Carolina went on a 10 to two run to bring the score to 20-12 in their favor. The Hurricanes rallied late in the game to get to within three points but the Tar Heels took the game 30-26 off the strength of two kills by Molly Pyles. The Tar Heels capitalized on seven Miami errors and hit .436 as opposed the Hurricanes’ .239 average.

Game two saw much of the same with both teams battling for the lead and featured 12 ties and seven lead changes. The Tar Heels led 24-21 before the Hurricanes got kills from Savage, Tipiana and Johnson to take a one point lead. Johnson posted back-to-back kills to bring the give the Hurricanes game point. Miami put the game away, 30-27, with blocks from Michel and Johnson. The Hurricanes held the Tar Heels to a match-low .164 hitting percentage and a match-high nine errors.

Game three saw the Hurricanes post their strongest offensive effort. The game was tied nine times before the Hurricanes took the lead for good after two Johnson kills. The Hurricanes won the game by the score of 30-25. Miami hit .333 while holding Carolina to a match-low 14 kills.

As a team, the Hurricanes posted a match-high 10.5 total blocks, 79 kills and 75 assists, as well as out-digging the ACC’s dig leader with a 71 dig performance.

“After game one we started blocking and gave them problems at the net,” concluded Lantagne Welch. “Our middles made adjustments and were able to shut them down.”

The Hurricanes hope to take their momentum on the road when they travel up-state to face Florida State on Wednesday at 7:00 pm. The match will be shown live on the Sunshine Network.