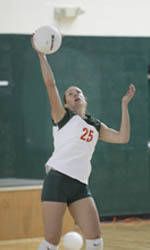 The Hurricanes, who are riding on a three match winning streak, improved to 5-3 in their home opener in front on an announced crowd of 788.

“This is a great start,” said an exuberant head coach Nicole Lantagne Welch. “I’m really proud of this team. We showed good execution the whole game.”

Miami set the tone early in the first game with a three point run off of kills from senior outside hitter Valeria Tipiana and junior outside hitter Karla Johnson as well as a block by redshirt sophomore middle blocker Ciara Michel. The Seminoles tied the game at 9-9 to remain close but kill a by Johnson kept FSU at bay, giving Miami a two point lead. Florida State once again crept on the scoreboard remaining within two points until a Miami attack error on game point brought them to within one. Tipiana’s kill off sophomore Jill Robinson’s set, put the game away, 30-28.

Game two would prove a little different with a regrouped Seminole squad keeping the game within one point until eventually taking a 24-21 lead. The Hurricanes capitalized on back-to-back Florida State errors to tie the game at 25. After a timeout, Miami fell behind two points before Tipiana connected on a kill to give Johnson the ball and bring the score to 27-29. Johnson’s service ace and two consecutive bad sets by the Seminoles tied the score at 29-all to make way for a come back win punctuated by a block assist from Tipiana and Michel for the 31-29 win.

Miami battled back from an early 4-7 deficit in game three before connecting on three kills to bring the score to 13-9 in Miami’s favor. The Hurricanes held the Seminoles to a .132 hitting percentage to put the game away, 30-24.

As a team the Hurricanes connected on 59 kills for a .248 hitting percentage while combining for 50 total digs.

When asked what was the biggest contributor to their first ACC win Grass, a team co-captain, responded “It was a team thing. We were all talking on the court and getting really fired up. It was a little of everything.”

The Hurricanes return to conference action on Sunday when they travel to Blacksburg, Va. to take on former BIG EAST rival and now fellow ACC member Virginia Tech for a 1:00 pm start.