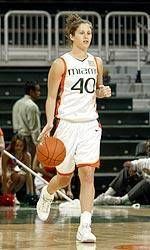 No. 24 Hurricanes Set To Face No. 20 Boston College

The Hurricanes (12-1, 1-1 BIG EAST) look to rebound after suffering their first loss of the season Wednesday night, falling to Villanova 58-55 in the Pavilion.

The Eagles (12-1, 2-0 BIG EAST) are currently on a five-game winning streak and undefeated in conference play after beating Providence 73-53 Wednesday night in Conte Forum.

The Hurricanes and Eagles will meet for the 22nd time. Miami leads the all-time series 14-7 but has lost the last two meetings with the Eagles.

BC has won three of the last five meetings, including an 84-77 win over UM in Chestnut Hill last season.

Tamara James continues to lead the team in scoring with 16.5 points per game. Four of Miami’s five starters are averaging in double figures.