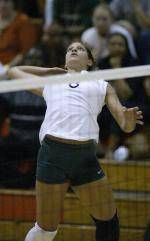 Florida A&M pulled away in the fifth and final game, downing UM, 15-10 to hand the Hurricanes their first loss in nine consecutive matches this season and only their fourth loss all-time at home.

“We showed a lot of character tonight, coming back after losing the first two games,” Head Coach Nicole Lantagne Welch said, “but we just started too late. This was a great match between two teams.”

The Rattlers’ Adriana Kostadinova led all players with a match-high 24 kills and Mariela Portocarrero turned in a match-leading 69 assists.

The Hurricanes will return to BIG EAST play this weekend, traveling to Connecticut on Saturday, Oct. 26 to take on UConn at 2 p.m. before going to on to play St. John’s in New York on Sunday, Oct. 27 at 2 p.m.