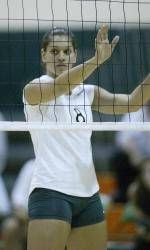 “This was a really great match,” Head Coach Nicole Lantagne Welch said. “Leyre had an awesome match offensively and came up with some really big blocks on defense. It’s really fun to see her play so well.”

Junior outside hitter Valeria Tipiana contributed to the win with 13 kills on 25 attempts for a .440 hitting percentage and added 10 digs for the Hurricanes.

“It was nice to have Mallorey back healthy for the first time this season,” Lantagne Welch said. “She brought spirt and attitude to the court and really looked strong.”

The Hurricanes will return to action on Sunday, Oct. 12 to host Villanova at 2 p.m.

For all your Hurricane volleyball action, visit hurricanesports.com.