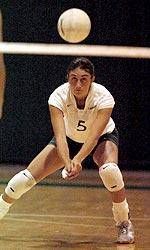 While they had relied on senior outside hitter Marcela Gamarra (Medellin, Colombia/Miami-Dade CC) during Tuesday night’s win over Florida Atlantic, the Hurricanes received a balance effort from their hitters Friday night.

“I was very pleased with our performance tonight,” said UM coach Nicole Lantagne Welch. “We executed well and had a very balanced attack.”

The coach cited all-around efforts from Tipiana, Tyson, and Gamarra as being critical in the win.

The Hurricanes also held at bay a superior athlete in Jackie Ahlers, who registered a match high 16 kills.

Sunday at 2 p.m., the Hurricanes will host another strong opponent when the UConn Huskies arrive in Coral Gables.

“We’re looking forward to playing UConn, a team that’s been in the tournament several years running,” the coach said. “We look forward to any game that can put us into a better position in terms of the BIG EAST Conference Tournament.”