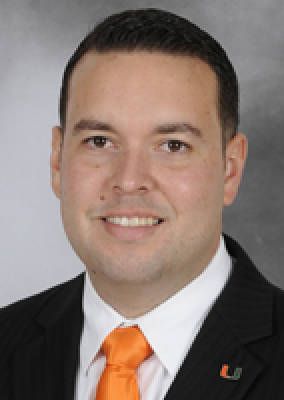 Alfonso Restrepo was promoted to Assistant Athletics Director for Development in August 2019, after joining the Hurricane Club staff in 2013. He oversees operations, external communications/branding, and game day VIP hospitality for the Hurricane Club. He is also the lead fundraiser for the Building Women’s Champions Campaign and a member of the major gifts team.

Prior to his promotion, Restrepo served as Director of Development for Major Gifts. During Restrepo’s tenure, the Hurricane Club reached several historic milestones, including 11,000 Hurricane Club members and over $49 million raised in cash and commitments in 2017.

Restrepo has been a key contributor in several fundraising initiatives and projects, including the Carol Soffer Indoor Practice Facility, the Football and Basketball Victory Funds, the Celebration of Women’s Athletics annual event, as well as helping increase former student-athlete giving.

Previously, Restrepo served as the Assistant Director of Development for the Panther Club at Florida International University from 2008-12. He oversaw the annual fund program at FIU, served as a member of the major gifts team, and was the supervisor for the mascot, cheerleading and dance programs. He was also a member of the FIU Athletics senior staff.

Prior to FIU, he worked for the Miami Dolphins as a Project Support Specialist, focusing on season tickets and group tickets sales as well as special event operations.