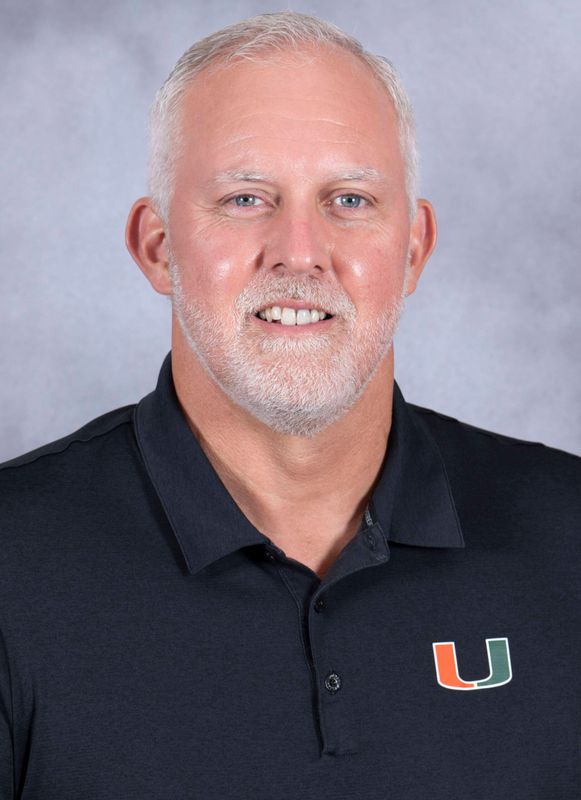 Jose “Keno” Gandara accepted the position of head volleyball coach at the University of Miami on March 20, 2013, becoming the second head coach since the program returned in 2001.

In Gandara’s ninth season at the helm in 2021, Miami returned to the postseason for the first time since 2017 and fifth time under his direction. The Canes advance to the second round of the tournament in the Gainesville Region, ultimately falling to site host Florida. UM finished the season 25-5 overall, with 15 wins coming by way of sweep, and 15-3 in conference play on its way to a second-place finish in the ACC, all program bests under Gandara and the most wins in a season since 2012 when the team posted 26. The Hurricanes finished the year ranked 14th in the RPI and 25th in the AVCA Division I Coaches Poll.

Gandara led Miami as one of the top blocking teams in the nation. The hurricanes ranked 16th in the country with 2.65 blocks per set and 32nd with 284 total blocks. Behind his leadership, the Miami was among the top in the ACC in several categories at the end of the regular season. The Canes were sixth in hitting percentage (.244), second in opponent hitting percentage (.188), fifth in assists per set (12.51), third in total blocks (271) and blocks per set (2.63), second in digs per set (15.23) and fifth in total digs (1569).

The Hurricanes returned the NCAA Championship in 2017 for the fourth time in five seasons under Gandara’s leadership. Miami won its first postseason match since 2014, defeating the College of Charleston in the opening round of the tournament in a Gainesville, Fla. The Canes fell to No. 2 Florida in four sets in an exciting second round matchup to close the season 22-6 and finish with their best winning percentage since 2012.

In 2016, Gandara led a resilient Miami squad that proved to rise to the occasion when it stepped into an opponent’s gym. The 2016 Hurricanes won 11 matches away from Coral Gables, picking up big road wins at Notre Dame and Louisville. Junior outside hitter Olga Strantzali developed into one of the best players in the country, receiving AVCA All-America honorable mention and earned AVCA All-East Coast Region and First Team All-ACC honors. Strantzali and freshman setter Hannah Sorensen were named to the All-ACC Academic Team in recognition of their success on the court and in the classroom.

Gandara led the Hurricanes to three straight NCAA Tournaments in his first three seasons at the helm of the Miami volleyball program. The Canes were selected to the 2015 NCAA Tournament, where they faced Iowa State in a first round match in Madison, Wis. The Canes finished the season 21-10 and 14-6 in the ACC, while Miami’s 21 wins marked the second consecutive 20-win season under Gandara’s leadership. The Hurricanes saw seniors Alexis Mourning and Taylor Scott, as well as sophomores Olga Strantzali and Haley Templeton, named to the 2015 All-ACC Second Team with Strantzali and Templeton also earning AVCA All-East Coast Region Honorable Mention.

Miami reached the NCAA Tournament for the sixth consecutive season in 2014 and seventh time in program history. The Hurricanes, who finished the season 22-9, defeated UCF in five sets in the first round of the NCAA Tournament. The victory was Gandara’s first NCAA Tournament win as a head coach. Miami’s 22 wins also gave Gandara his first 20-win season at the helm of the program.

The Canes reached the second round of the NCAA Tournament before falling to No. 8 Florida in four sets. But Gandara helped develop several players to reach unprecedented levels of success.

The 2013 season was filled with firsts for Gandara. He secured his first win as a NCAA head coach on Aug. 30, when Miami defeated Austin Peay, 3-1. Gandara collected his first home win when Miami beat LSU in five sets on Sept. 14. The first-year head coach tallied his first ACC win when the Canes defeated Boston College in five sets on Sept. 28. Gandara also guided the Canes to their fifth straight NCAA Tournament appearance and first under his tutelage.

The Hurricanes dropped their first round match against Oregon in three sets, but 2013 was still a successful first season under Gandara. Miami had four players earn All-ACC distinction, including Savanah Leaf and Emani Sims (first team), Alexis Mourning (second team) and Ryan Shaffer (third team). The Canes defeated No. 12 North Carolina at home and earned one of the coveted 64 spots in the NCAA Tournament.

Gandara is a highly-respected teacher who has played and coached at the top levels of college and professional volleyball. Keno assisted former Washington head coach Jim McLaughlin with all aspects of coaching, including opponent scouting and contributing to the Huskies’ defensive package. The Huskies won a National Championship in Keno’s first year on staff, 2005, and reached the 2006 Final Four.

A San Juan, Puerto Rico, native, Gandara graduated from UC Santa Barbara in 1990 after a successful volleyball career with the Gauchos as a middle blocker. Gandara was a first team All-America selection in 1989 and second team selection in 1988 after leading UCSB to the national title match. He was also a two-time all-conference honoree. Gandara has also been inducted into the UCSB Hall of Fame. He also represented both the United States and Puerto Rico in international competition as a member of their respective national volleyball teams.

Gandara is married to Stephanie Cox who was a standout setter at UCSB and played on the AVP Tour. The couple welcomed their first child, a son named Lucas, in April 2011.