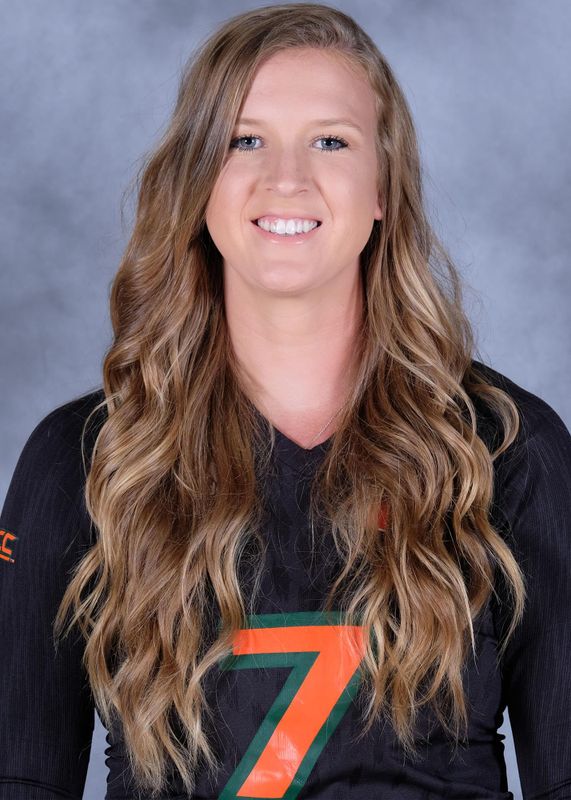 2020 (Redshirt Senior): Saw action in two matches during the eight-match season… Recorded one kill and one block against Clemson (10/8) and appeared for two serves on Senior Day against Florida State (10/16) to help No. 11 Miami sweep the Noles.

2017 (Sophomore): Got the season going with four kills on .667 hitting and a block against Little Rock (Aug. 25) … Contributed a kill, a dig and two blocks (tied for team-high) at Southern Miss (Aug. 25) … Had an impressive start to the Sunshine State Classic with season-high 10 kills on a .350 hitting and career-high eight blocks in the opener against FAU (Sept. 1) … Dill added three kills and three blocks in the three-set win vs. UCF (Sept. 2) … had an assist in each match … Got her first taste of ACC action for the season at Notre Dame (Sept. 29) … Started her first ACC match against Pittsburgh (Oct. 8) and repaid the trust with seven kills on a .500 hitting, career-high-tying three digs and a block … Contributed six kills, three blocks and ACC-best for her three blocks in thriller at Duke (Oct. 13) and followed up with five kills and a block against Wake Forest (Oct. 15) … Hit a combined .385 in split weekend against Louisville (Oct. 20) and Notre Dame (Oct. 22), accounting for a total of five kills and no errors. Dill tallied six blocks – career-best two solo blocks against the Fighting Irish – and an assist on the weekend … Started and tallied five kills at Pittsburgh (Nov. 3) … Recorded eight kills and seven blocks in a victory over Boston College (Nov. 9) before picking up five kills, three blocks and an assist in a win over Syracuse (Nov. 12) … hit .412 during weekend sweep at Virginia (Nov. 17) and Virginia Tech (Nov. 19), accumulating 10 kills and three digs and recording career-best two assists and two blocks in the five-set win against the Cavaliers … Recorded seven kills and four blocks in a win over Georgia Tech (Nov. 22) before tying a career-high of three digs along with a kill, an assist and a block in a win over Clemson (Nov. 24) … Contributed eight kills, four blocks and a dig in a victory over Charleston (Nov. 30) before adding eight kills and five blocks against Florida (Dec. 1) in the NCAA Championship tournament.

2016 (Freshman): Had a kill and two blocks in her Hurricanes debut, a victory against Florida A&M (Aug. 26) … Made her first start in win over FIU, finishing with five kills and three blocks, while hitting .385 for the match (Aug. 27) … Contributed to the teams five-set win over UTSA (Sept. 2) … Saw action against No. 3 Texas (Sept. 3) … Had three kills and five blocks against Loyola Chicago (Sept. 9) … Contributed for four kills and four blocks against Kansas State (Sept. 9) … Had two kills and four blocks against Mississippi State (Sept. 10) … Saw action in reserve against Notre Dame (Sept. 25) … Had four kills and a block in reserve against Syracuse (Oct. 2) … Had four kills and two blocks at NC State (Oct. 7) … Tied a career high with five kills, added a team-best three blocks and recorded the first two service aces of her career in match against UNC (Nov. 4) … Tallied four kills and hit .667 to go with three digs and a service ace in match against NC State (Nov. 6) … Notched four kills and a block in win at Syracuse (Nov. 11) … Finished with a career-best nine kills on a .571 attack percentage and had a career-high seven blocks in win over Boston College (Nov. 13) … Had six kills and a team-leading seven blocks in win at Wake Forest (Nov. 18) … Finished with seven kills on a .400 hitting percentage and added a team-leading four blocks at Duke (Nov. 20) … Finished with a career-high 15 and a career-best .464 attack percentage, adding two blocks and two digs against Georgia Tech (Nov. 23) … Had four kills and a team-high four blocks in win over Clemson (Nov. 25).

High School: Selected to the 2016-16 Under Armour Girls High School All-America Third-Team … Was a nominee for the 2015 All-Clay County Player of the Year and was named the FACA Class 3A Player of the Year and to the All-First Coast Team … A member of the high school varsity team since the eighth grade … Was team captain at St. John’s Country Day in both 2014 and 2015 … Helped her team to a 19-7 record and a perfect 8-0 mark in the district during the 2015 season, tallying 389 kills and 51 total blocks, while hitting .537 over 74 sets as a senior … Reached 1,000 career kills during her junior season and has amassed 1,650 in her career … One of only two St. John’s Country Day players to earn a spot in the school’s 1,000-point club … Three-time All- Clay County selection and has been named to the Florida Times Union All-Area Team three times … Played club volleyball with JJVA for seven years, playing in four Junior Nationals and in the USA BIP Select All-Star Team Global Challenge in Pula, Croatia.