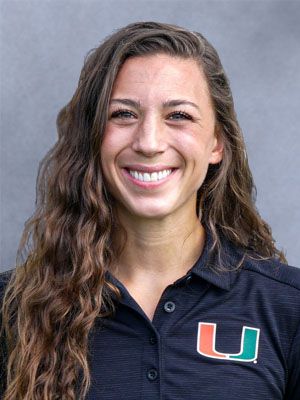 Arianna Luther came to the University of Miami as an Assistant Strength and Conditioning Coach in October of 2020. She serves as the strength and conditioning coach for the women’s soccer, swimming and diving, and rowing programs.

Luther joined the Hurricanes after one year at the University of Nevada, where she worked with track and field and men’s tennis.

Prior to her time in Reno, Nevada, Luther spent two years earning her Master’s Degree in Kinesiology with an emphasis in Sport Psychology from Texas Christian University. At TCU, she also was a Strength and Conditioning Graduate Assistant for the women’s soccer, swimming and diving, and beach volleyball programs.

Luther received her Bachelor’s Degree from Lindenwood University in 2015, where she studied Exercise Science with a minor in Strength and Conditioning. She also was a collegiate gymnast during her time at Lindenwood.