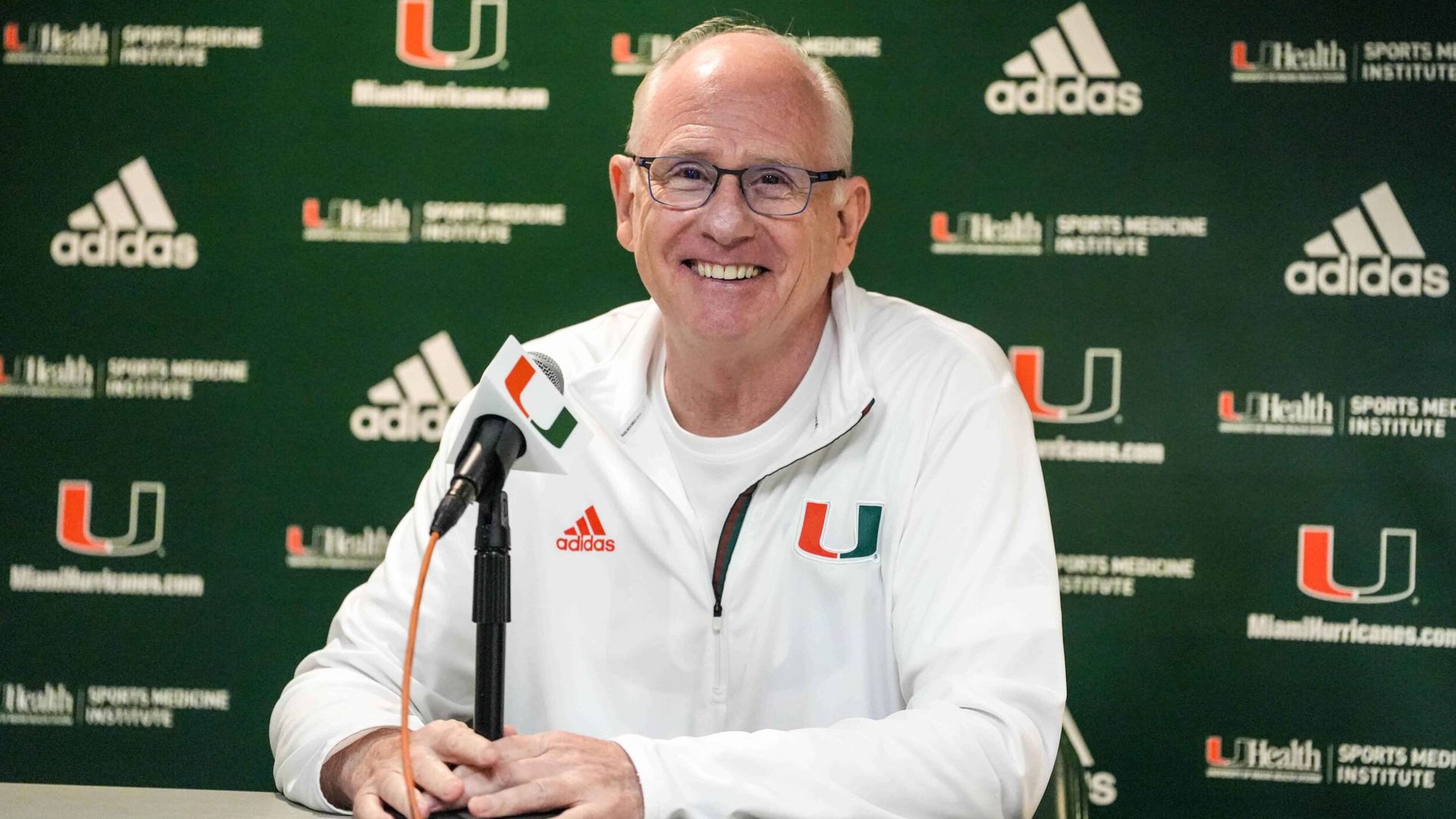 “I am incredibly honored and humbled to be named a nominee for the Naismith Memorial Basketball Hall of Fame. To be considered alongside some of the giants of our game was beyond my wildest dreams when entering this profession over 50 years ago,” Larrañaga said. “I’d like to deeply thank each of my assistants, staff members and players throughout the years. This recognition would not be possible without them and it demonstrates not what I’ve accomplished, but what we have all done together. I’m so grateful to the administrators and fans who have supported us along the way. I also want to especially thank my wife, Liz, and sons, Jay and Jon, for being by my side through all the highs and lows. I’m excited to continue coaching here at Miami and look forward to further elevating this tremendous program.”

Among the most accomplished coaches in NCAA men’s basketball history, Larrañaga is in his 51st season as a college coach, including his 39th leading a program and his 12th at Miami. He owns 708 victories as a head coach, good for No. 33 all-time on the DI leaderboard, including ninth among active coaches.

Larrañaga began his coaching career as an assistant at Davidson College from 1971-76 and then served as a player/coach for Geronemo Basketball Club in Belgium the following season. The Bronx, N.Y., native returned to the college level in 1977, taking a job as the head coach at American International College. He led the Division II program for two seasons, posting a 27-26 record. 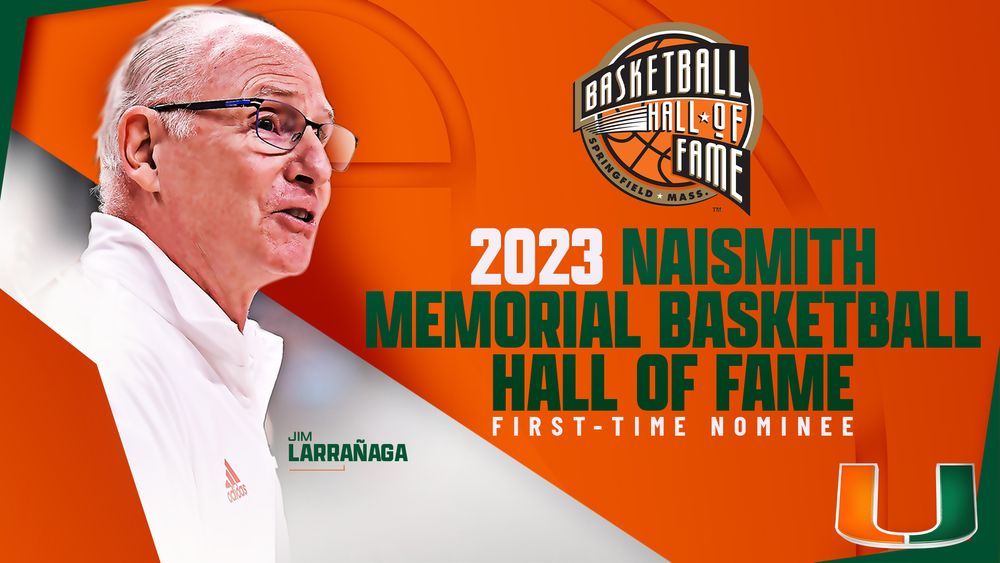 Following his success in Charlottesville, Va., Larrañaga became the head coach at Bowling Green State University, where he worked from 1986-97. He steered the Falcons to a 170-144 mark, including a 101-85 ledger in MAC play, and three NIT bids.

After a 22-10 campaign—the most wins by Bowling Green in 47 years—and a MAC regular season crown in his final year, Larrañaga departed for George Mason University. There, he worked from 1997-2011, leading one of the most successful stints in CAA history.

Larrañaga went 273-164 in 14 seasons at the helm of the Patriots, including a superb 165-79 mark in CAA play, setting league records that stand for overall victories and conference triumphs. He won four CAA regular season titles and three postseason tournaments, and logged five 20-win seasons, including two with 27 victories.

The Patriots made nine postseason appearances in Larrañaga’s tenure, including five of their six all-time trips to—and all five victories in—the NCAA Tournament. He led the team to the 2006 Final Four, knocking off three programs with multiple national championships on the way to becoming the first mid-major semifinalist in 27 years.

The 2006 Clair Bee National Coach of the Year, Larrañaga concluded his George Mason tenure with a 27-7 campaign in 2010-11 that included a spot in the NCAA Tournament Round of 32. He accepted the job at the University of Miami on April 22, 2011. 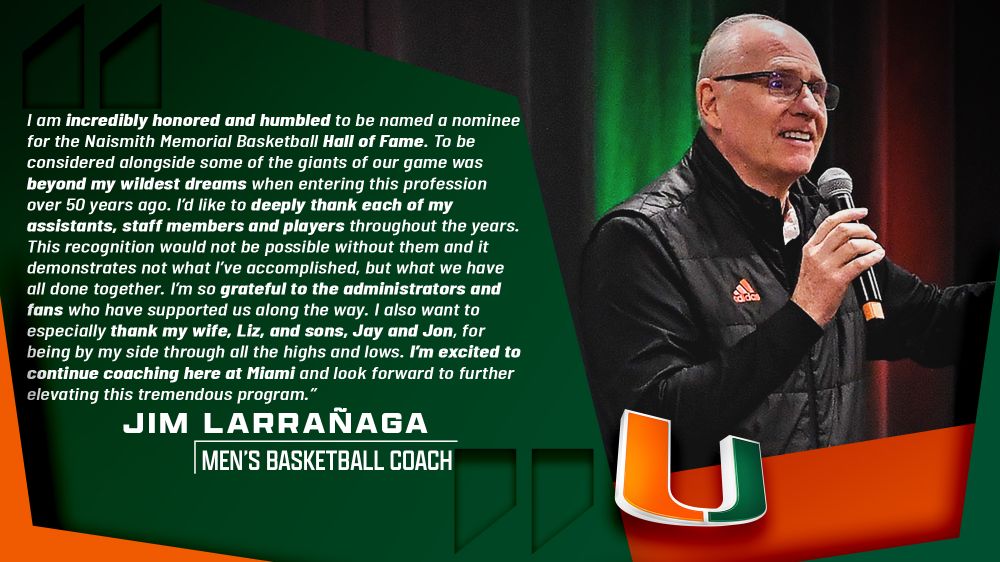 Now in his 12th season at The U, Larrañaga is the winningest coach in program history with a 238-142 record and is slated to enter the UM Sports Hall of Fame in 2023. He has guided Miami to seven 20-win campaigns, all four of its 25-win seasons, five of its 11 NCAA Tournament berths, seven of its 11 victories in the NCAA field, three of its four Sweet 16 trips and, in 2021-22, its lone Elite Eight bid.

“I am excited to hear that Jim has been nominated for the Naismith Memorial Basketball Hall of Fame,” Miami Vice President/Director of Athletics Dan Radakovich said. “It is a tremendous honor for Jim, who has been a terrific ambassador for college basketball throughout his career and especially here at Miami, where he has led our program to great heights over the past 12 seasons.”

The two-time USBWA District IV Coach of the Year, who owns 24 AP top-25 wins at Miami, ranks No. 13 all-time in wins as an ACC head coach and places No. 11 in ACC league triumphs (108). He was the consensus national coach of the year in 2012-13 after guiding the Hurricanes to a sweep of the ACC titles, a program-best 29 wins and their first Sweet 16 in 13 years. All of his four-year players at Miami have earned a bachelor’s degree from the institution.

A two-time ACC Coach of Year, two-time CAA Coach of the Year and one-time MAC Coach of the Year, Larrañaga owns 19 postseason appearances in his career, including a 12-10 record, four Sweet 16s, two Elite Eights and one Final Four in 10 NCAA Tournament trips. He is the only coach in NCAA DI history to take two different programs to the Elite Eight as a double-digit seed.

Larrañaga possesses 13 20-win campaigns, six 25-win seasons and 22 10-win conference slates, as well as six conference regular season titles and four league postseason tournament crowns. He is the only coach to claim 100-plus league wins at three different schools and/or in three different leagues, as well as one of just four coaches all-time to win 150-plus games at three DI schools, alongside Hall-of-Famer John Calipari, Hall-of-Famer Lefty Driesell and Cliff Ellis.

In addition to being the winningest coach ever at both Miami and George Mason, Larrañaga led each program to its highest ranking in school history—second and eighth, respectively—and is one of 17 coaches with 200-plus wins at multiple DI schools. Also the second-winningest coach in Bowling Green history, Larrañaga’s players have combined for 59 all-conference honors in his 36 full seasons as a DI head coach.

Naismith Hall of Fame finalists from the North American and Women’s committee for the Class of 2023 will be announced on Feb. 17, at 5:30 p.m., in Salt Lake City during NBA All-Star Weekend. The entire Class of 2023, including those selected by the direct-elect committees, will be unveiled during the NCAA Final Four in Houston on April 1 at 11 a.m.