Understanding What it Takes

CORAL GABLES, Fla. – When Maci Epstein committed to the University of Miami women’s tennis team as a graduate transfer in the summer of 2016, she never imagined she would still be around the sport five years later.

Yet here she is, in the spring of 2021, working as the volunteer assistant coach for the Hurricanes.

“I always thought I would want to have an office job after college and that’s where I went, but after a year, it got really old,” Epstein said. “What I wanted to do was be back on the court, be outside, be in Miami and make a difference, honestly.”

After finishing her playing career in 2017, Epstein continued her graduate studies during the 2017-18 academic year and served as a student assistant coach while doing so.

Then, she made the move to an office job. In January 2020, she returned to Miami as the interim assistant coach. Then, in December 2020, she shifted into her current role with the program.

This is now the fourth season of the last five during which Epstein has been a part of the Hurricanes, either as a player or coach. Although she did not expect to transition from the former to the latter, she is grateful she did.

“I never thought that I would be coaching like this, but I’m really happy,” Epstein said. “I feel like Paige has taken me under her wing … and I’m just really thankful to have her as a mentor for me [on this] career path.” 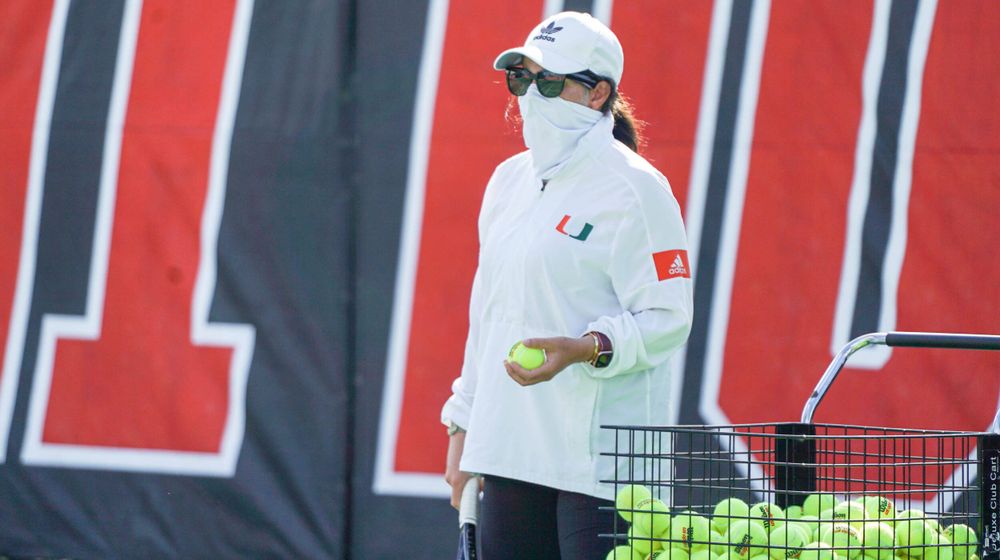 While Epstein appreciates what Yaroshuk-Tews has done for her, Miami’s 20th-year head coach feels the same way about her former player.

There is a reason, of course, why the two-time ITA Southeast Region Coach of the Year has welcomed Epstein back to the program in three different capacities since she concluded her career. The Winter Park, Fla., native brings value and her coach-turned-boss knows that.

“Maci has been an amazing bridge between the coaches and players,” Yaroshuk-Tews said. “She has been able to step up as a coach and communicate her vision for each player in a manner that I think they can relate to. She has the ability to keep things light with the team, which keeps them loose. Let’s not forget, though, Maci likes to win; she’s a competitor. When she has her game face on, these kids know it’s ‘go’ time.”

The benefit Epstein brings to the table is referenced not only by Yaroshuk-Tews, but by her standout player, as well.

Estela Perez-Somarriba joined the Miami program the same year as Epstein. She came in as a freshman from Madrid, while Epstein matriculated as a redshirt senior following her graduation from the University of Virginia.

After playing together in 2016-17, Perez-Somarriba has spent three of the next four seasons with Epstein on the coaching staff. The 2019 NCAA singles champion and two-time ACC Player of the Year feels Epstein is an excellent fit in her role.

“Maci’s personality complements that of Paige and [associate head coach Alex Santos] very well, as she knows how to find the positives in every situation and tough moment the team is going through,” Perez-Somarriba said. “I’ve had the honor to enjoy her as a teammate and a coach. Her impact goes beyond wins or losses; she is always willing to help us, motivate us and bring the best out of us. Her ability to bring together all the different personalities within a team is very special.”

One of the reasons Epstein is able to aid the Miami players the way she does is because of her recent tenure as a player. 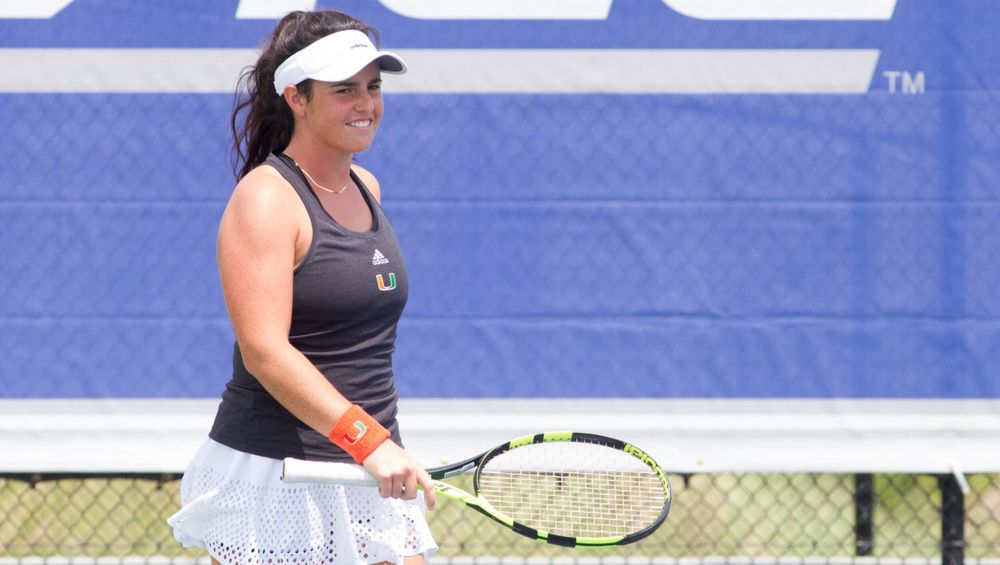 She posted a 93-54 doubles ledger and an 89-55 singles record during her superb collegiate career, which included a pair of ACC Championship crowns at Virginia. Epstein peaked at fifth nationally in the ITA doubles rankings and No. 69 in the country in singles.

Now, she gets to help pass the knowledge she gained from her five-year playing career on to the current batch of Hurricanes.

One thing that is abundantly clear right now is that this group of Miami players, aided by guidance from Epstein, is indeed understanding what it takes.

Last week, the Hurricanes swept Virginia Tech, 7-0, and followed that with a 4-3 victory over then-eighth-ranked Virginia.

“I’m so proud of these girls,” Epstein said. “I think what the key is, is that the girls are starting to trust the process and trust each other more than ever. As a result, they’re able to come together as a team at a perfect point in the season.”

While some teams hit their stride early in the season and then tail off late, it has been the opposite for the Hurricanes, who are playing their best tennis of the year at the best possible time.

“I think the girls are building confidence, through practice and through big matches like last weekend,” Epstein said. “I just think everything that they put into this season is showing at the perfect point.” 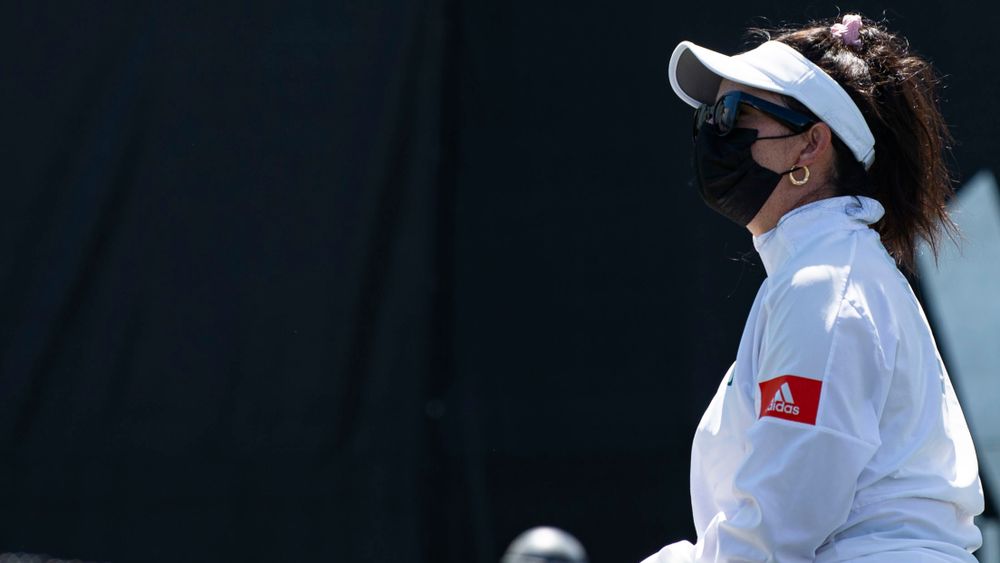 A big reason Miami managed to pull off the upset Sunday over the Cavaliers was the success of its bottom half of the lineup.

After losing the doubles point, the Hurricanes took four of six singles matches to come away the top-10 win.

That included triumphs from the No. 4, No. 5 and No. 6 positions, with the Hurricanes needing each and every one of them to tally their biggest triumph thus far in 2021.

“It was nice because we have such a strong one and two,” Epstein said. “To have the bottom of the lineup hold their own—we’re going to be a tough team to beat if that’s the case because we’re going to have a strong lineup through all six positions.”

The clinching point came at the No. 4 spot, where second-year freshman Florencia Urrutia fought off Hibah Shaikh in a three-set thriller, 6-2, 4-6, 6-3.

After dropping three of the opening four games in set three, Urrutia won each of the last five to clinch the overall match and earn a celebratory mobbing from her teammates.

The victory for the Santa Fe, Argentina, native was her second in a row after losing two of her prior three affairs. The win came when her team needed her most.

“I think we were all really happy that it was Flor, just because she has pushed through a lot of different things this season and she’s come such a long, long way in such a short period of time,” Epstein shared. “I think she’s put her heart into this team and we can all see that she’s really worked hard for this.” 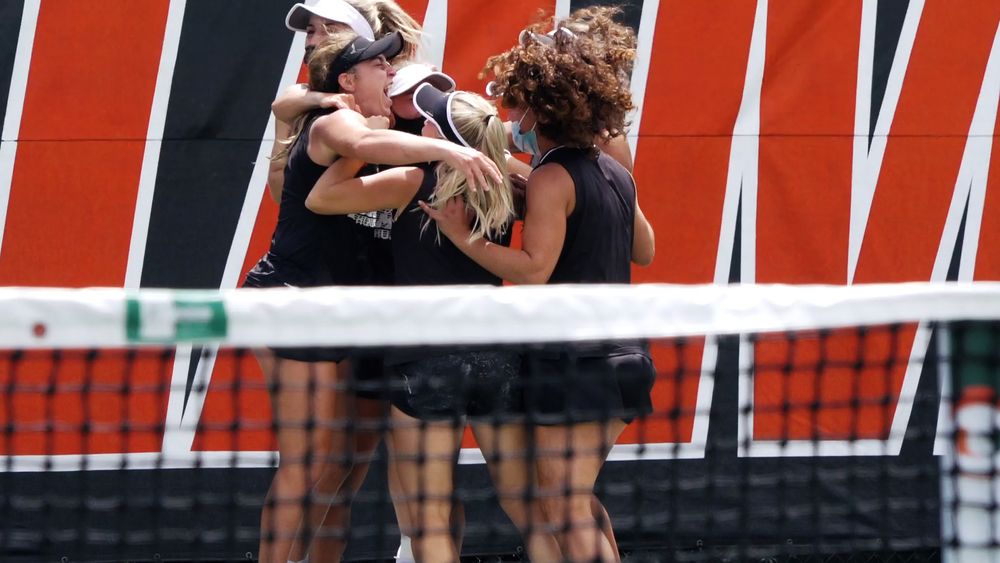 The Hurricanes certainly cannot rest on their laurels for too long after defeating Virginia, as another stiff test awaits.

Up next is a trip to Tallahassee, Fla., where Miami meets Florida State Friday at 4 p.m. at the Scott Speicher Tennis Center. The Seminoles are fourth in the computerized rankings and fifth in the ITA Coaches Poll.

While it will certainly be a difficult task to earn the top-five road win, Epstein is confident the Hurricanes will have a strong chance of doing so if they compete the way they did against Virginia.

“I think the level of discipline and the level of fight that the girls brought Sunday will play a huge role in what we do this week,” she said. “If we can keep that up, I think we’ll have a really great chance of taking them down.”

The Seminoles are 15-3 (10-2 ACC) on the season and have won all 11 of their home matches, as well as each of their past six matches overall. They will be the sixth top-12 team the Hurricanes face this year, with all of them in ACC play.

Any time Miami and Florida State square off, it is always a big deal. That the Seminoles are ranked so high just adds another element to the match.

“There is always motivation to beat FSU, but to have another opportunity to beat a top-10 team for the second week in a row is extra [motivation, as well],” Epstein remarked. “I think we’re lucky that our conference is so strong and can give us these types of opportunities week after week.” 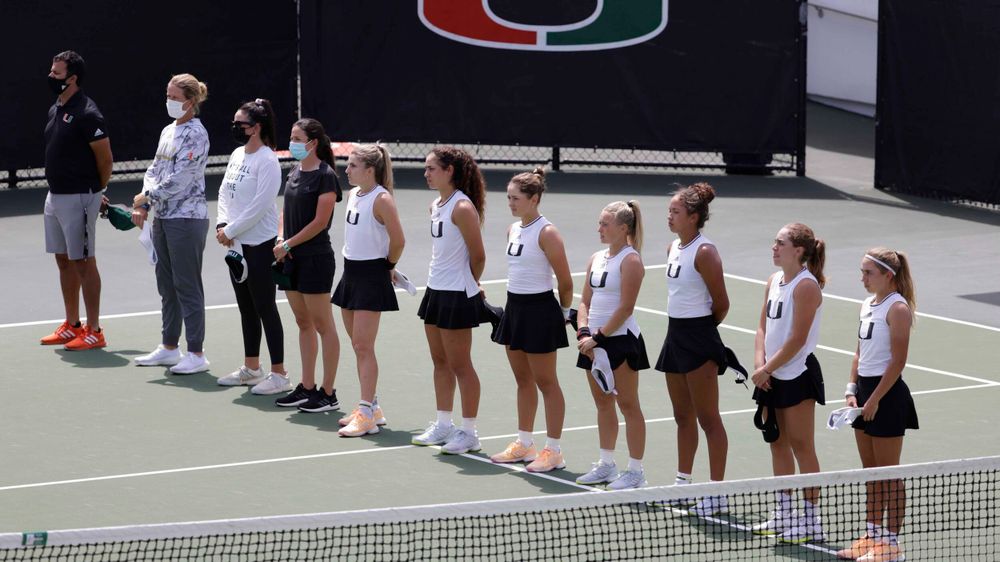 Miami is 35-8 all-time versus Florida State, including 8-4 on the road. The Seminoles, however, have won the past two meetings, including a 4-3 road triumph last season on Feb. 17, 2020, in the most recent affair.

The Seminoles have two ranked singles players entering the weekend, with Giulia Pairone at eighth nationally and Emmanuelle Salas at No. 31.

In doubles, Florida State sports three ranked pairs, led by Nandini Das and Andrea Garcia at No. 12. Victoria Allen and Petra Hule check in at No. 38, followed by Allen and Salas at No. 42.

Miami has two ranked singles players, as well, to go along with two ranked doubles tandems. In the former category, Perez-Somarriba is fourth in the country and freshman Isabella Pfennig places No. 17.

On the doubles list, Perez-Somarriba and Pfennig hold the No. 19 position, while second-year freshman Diana Khodan and Maya Tahan are right behind them at No. 20.

Meanwhile, for Epstein, helping lead the Hurricanes into a rivalry matchup between a pair of top-25 teams is just another element of what makes her time on staff at her alma mater so meaningful.

With just two matches left in the regular season, Friday will be one of the final times in 2021 she gets to coach this group of Hurricanes, while standing beside two coaches she looks up to so much.

“It’s always been very special to be here at Miami,” Epstein said. “It’s where I’ve always wanted to be … but it’s nice when you’re working with some of the most amazing coaches in the country.”

Live video for the Hurricanes’ contest at Florida State can be found HERE, while live stats for the match will be available HERE.