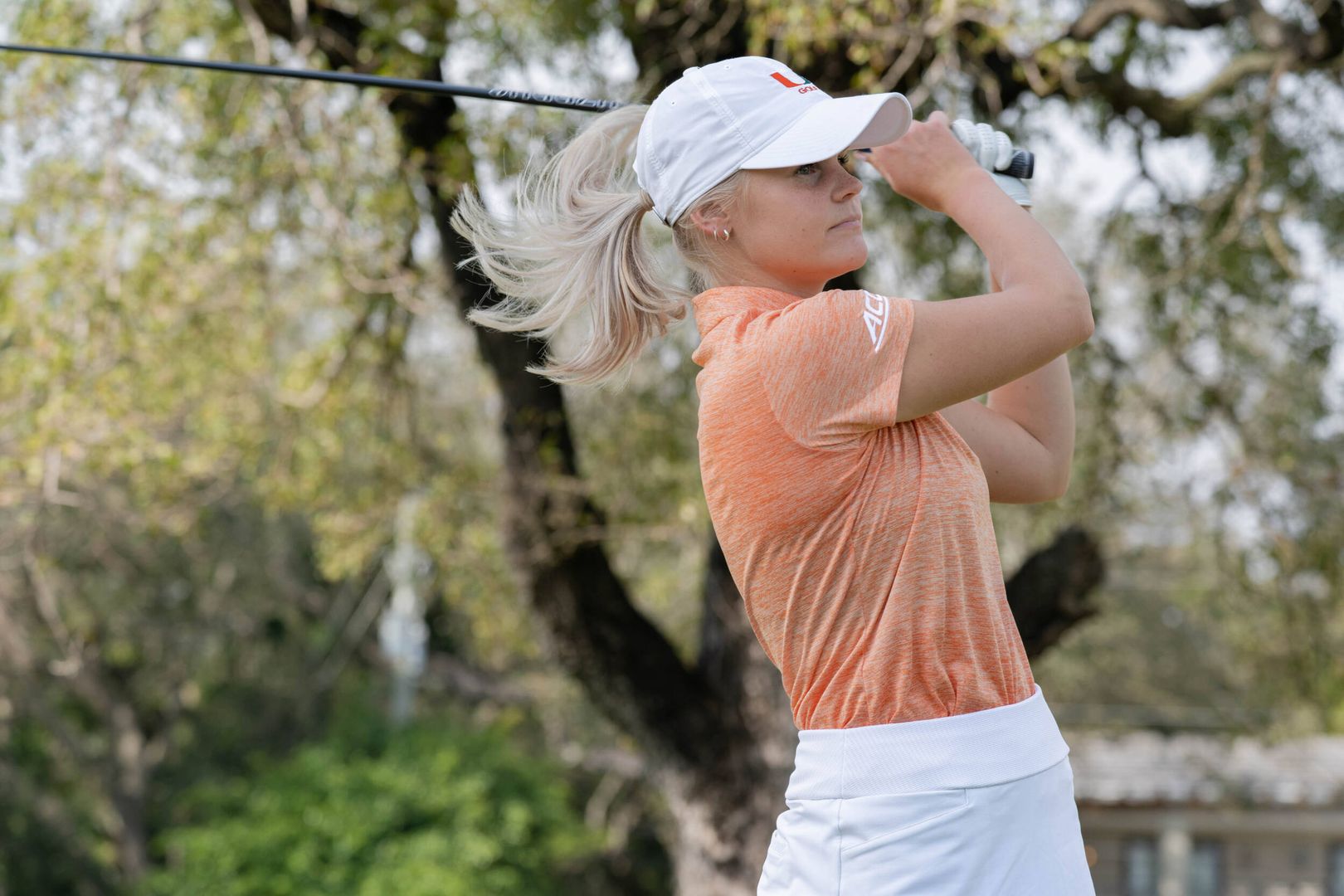 JOHN’S ISLAND, S.C. –  Away from official tournament action for three weeks, the University of Miami golf team is set to open its fourth event of the 2021 spring campaign Monday and Tuesday in South Carolina.

Hosted by the College of Charleston, the Hurricanes will take part in the Briar’s Creek Invitational at the par 72, 6,110-yard Golf Club at Briar’s Creek.

The opening 36 holes will be played continuously on Monday, with a shotgun start scheduled for 9 a.m. The 18th-ranked Hurricanes will tee off alongside student-athletes from No. 14 Maryland and No. 34 Michigan through the opening two rounds.

Returning to the starting lineup for the fourth time will be fifth-year senior Renate Grimstad, fourth-year junior Kristyna Frydlova and freshman Nataliya Guseva, while freshman Sara Byrne is set to compete in the third tournament of her young career.

Making her 2021 debut, two-time collegiate individual champion Anna Backman is looking forward to playing alongside her teammates outside of The Sunshine State for the first time since Feb. 18, 2020.

“It means a lot,” Backman said. “Golf has always been about competing to me, so I can’t wait to get back in it.”

The last time the Vääksy, Finland, native represented The U outside of Coral Gables, Fla., she shared the 2020 Allstate Sugar Bowl Intercollegiate individual title carding a seven-under, 212 in New Orleans.

Pacing the team at the par 73, 6,336-yard English Turn Golf and Country Club just over a year ago, she led Miami to a second-place team finish in the event.

Currently ranked No. 130 in the World Amateur Gold Rankings (WAGR)–third highest rating on the team–Backman returned to her hometown in Finland after the 2020 season was cancelled due to the ongoing COVID-19 pandemic.

Across the pond, she secured four top-10 finishes in five Finnish events, placing second, third, fifth, ninth and 11th over the summer.

While back home and since returning to practice Backman said, “I was mainly focusing on straightening my ball flight, which I have also been working on since coming back to Miami.”

Prior to sitting out the first three tournaments of the 2021 season, Backman had earned the start in each of the team’s 14 tournament appearances since she entered the program as an early January enrollee in 2019.

However, with the Hurricanes boasting their largest roster since 11th-year head coach Patti Rizzo became the leader of the program, each training session has been a grind. As all nine student-athletes have battled for just five positions all spring, each player has been driven to give their all each and every day since play resumed in January.

“The competition inside the team has definitely been tough this year, we have so many good players and everyone obviously wants to make it on the team for tournaments,” Backman said. “I feel like that has led to even higher motivation among the players, everyone is really focused on golf and gives all they have out on the course.”

On Monday and Tuesday, Backman and the Hurricanes will look to take everything they have learned at the Biltmore Hotel and Golf Course over the past couple months and apply it on the course in South Carolina.

“If everyone from this lineup plays to their potential, we will be fighting for the win and that’s where we always want to set the goal,” Backman said. “Individually, with this being my first tournament in a while, I don’t want to set too high of expectations. But instead, go out there with a good feeling. I will give all I have and keep a good mindset through the whole tournament.”