Baseball Back in the Top Five

CORAL GABLES, Fla. – The University of Miami baseball program is back in the top five after an ACC road series win at NC State over the weekend.

Miami is ranked highest by Baseball America, moving up one spot to No. 5. The Canes also went up one position to No. 6 in Perfect Game’s poll, No. 8 in D1 Baseball’s top 25 and No. 13 in the USA TODAY coaches poll. Miami is ranked No. 8 by the NCBWA and mysteriously dropped seven places to No. 16 in Collegiate Baseball’s rankings despite winning a conference series on the road.

The Canes traveled to Raleigh, N.C., looking to bounce back from a tough series against Virginia Tech. Miami battled to tie Friday’s game at 5 on a Jordan Lala three-run homer in the fourth inning. But the Wolfpack pulled away to take the series opener, 11-5.

Miami regrouped on Saturday and rallied late in a 6-4 win that evened the series. With the game tied at 4, Yohandy Morales led off the top of the eighth with a ground-rule double to right. The true freshman advanced to third on a wild pitch and Miami had runners at the corners when lefty Canaan Smith walked Alex Toral with one out in the inning.

After an incredible play by first baseman Austin Murr to retire Del Castillo, Morales evaded the tag at the plate to snap the stalemate and out Miami ahead, 5-4.

An inning later, true freshman CJ Kayfus picked a great time to get his first career hit, smoking a leadoff solo homer to left-center off Wolfpack reliever Dalton Feeney that gave the Hurricanes some breathing room, 6-4, and Carson Palmquist retired the side in order to earn his third save of the season. 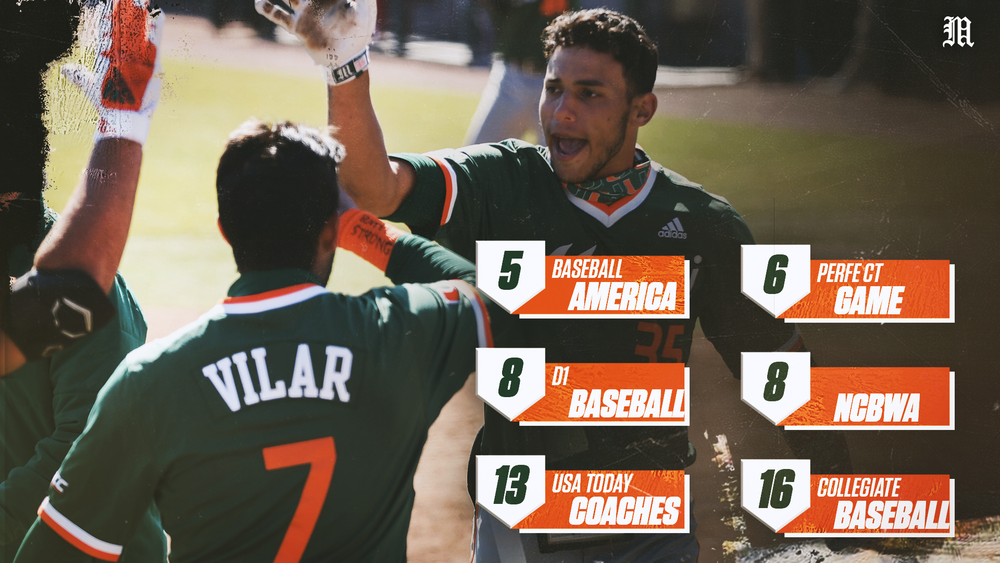 Anthony Vilar started the rally when he smashed a two-run homer to right and Morales followed with a solo shot to center. The back-to-back homers evened the score at 3 apiece and knocked out NC State starter Matt Willadson after five-plus innings of work.

Adrian Del Castillo welcomed lefty reliever Chris Villaman to the game by crushing his first homer of the season, wrapping up a barrage of Miami homers in the inning that put the Hurricanes ahead, 4-3. Sunday marked Miami’s first back-to-back-to-back homers since Randy Batista, Michael Burns and Romy Gonzalez all went deep in the ninth inning at Boston College on April 29, 2017.

The Hurricanes sent 11 batters to the plate against three different NC State pitchers in the sixth, as lefty Kent Klyman relieved Villaman and walked Dominic Pitelli to load the bases before issuing a free pass to Lala to cap a five-run Miami rally that put the Canes ahead, 5-3.

Morales added an insurance run when he destroyed another solo shot to center to lead off the top of the seventh. The blast that gave the true freshman his first multi-homer game as a Hurricane. He became the first Miami freshman with a two-homer game since Adrian Del Castillo hit two in a postseason game against Central Michigan on May 31, 2019.

Miami is home all week, hosting No. 25 FAU Tuesday and welcoming Wake Forest to The Light this weekend.