CORAL GABLES, Fla. –The Miami Hurricanes refused to look ahead all year, but they always knew there was a big game with a Coastal foe waiting for them on the back end of their schedule.

The season progressed and the No. 8/9 Canes (8-1, 7-1 ACC) climbed the polls as one of the top teams in the country.  Now they are a top-10 team looking to finish the season strong, but they face a tough test this week with No 20 North Carolina (7-3, 6-3 ACC). Saturday’s game means a lot to Miami, especially after a tough result at UNC a year ago.

“UNC will have our full attention,” head coach Manny Diaz said Saturday night following his team’s 48-0 win at Duke. “Obviously, we remember the game a year ago. Left a bad taste in our mouth. And our players will be highly motivated for North Carolina coming into our stadium, make no doubt about that.”

The Hurricanes have won two of the last three matchups against North Carolina, but the Tar Heels won, 28-25, last year in Chapel Hill, N.C. Miami leads the series 8-6 all-time in games played at home versus the Tar Heels, including a 47-10 win at Hard Rock Stadium back in 2018, but the Canes know they will face a difficult challenge when the ball kicks off at 3:30 p.m. on Saturday.

“They are probably the most explosive offense that we have seen to date,” defensive coordinator Blake Baker said. “All of their wide receivers are explosive and make a ton of 50-50 catches. Their running backs are as good as anyone we have seen. They are a great combination of a power back and speed back. Then Sam Howell is the head of the snake. He does a great job of distributing the ball and makes plays off schedule quite a bit and he can scramble for first downs.”

Howell has thrown for 3,129 yards with 26 touchdowns and six interceptions while completing 68.7 percent of his throws. A year ago, Howell found Dazz Newsome just inside the end zone for the go-ahead touchdown with 1:01 left to help UNC rally for the win. The Tar Heels last won at Miami in 2016, a 20-13 victory.

“I got the opportunity to play against them last year in the bowl game, so I have seen them up close and personal,” defensive end Quincy Roche said. “Their running back stable and wide receivers can compete with any team in the country. Sam Howell is a very talented thrower. The scheme as well with the way they pass protect and run block, they’re very explosive. I think we really got to lock in and be on our P’s and Q’s this game and make sure we’re at our best to come out with a dub.”

While Howell is one of the top quarterbacks in the ACC, so is Miami’s D’Eriq King. A semifinalist for both the Davey O’Brien Award and the Maxwell Trophy,King threw for 248 yards and three touchdown passes and added another rushing touchdown last week at Duke

King has picked up ACC Quarterback of the Week three times this year, including on Nov. 9; he has thrown for 2,334 yards and 20 touchdowns while adding 467 rushing yards and four rushing scores. One of the nation’s most electrifying players, King is a Heisman Trophy candidate at The U and he is motivated to battle against Howell and the Tar Heels.

“It is always a challenge going against a good team like North Carolina, especially when they have a good quarterback like Sam,” King said. “I think our defense will be well prepared and they are playing against him, I’m not, but at the same time there is a part of you that just wants to go out there and prove a point and win the game.”

Running backs Javonte Williams and Michael Carter are a formidable duo that has combined for1,841 yards and 23 touchdowns while also catching 46 passes for 563 yards with five touchdowns. While Howell is the face of the Heels, Williams and Carter do a lot of UNC”s offense.

“The real key to that football team is the running backs,” Diaz said on the Joe Rose Show Monday. “They are really, really outstanding players. They do a nice job of protecting the run game with RPOs. Just about every running play has a pass play behind it. They are going to go really fast and try to cause a lot of chaos.”

“We’ve got a really good opportunity this year to do some great things, go 10-1, go to a great bowl game."

While Newsome was the hero a year ago, he is one of two standout receivers that Howell looks to often. Dyami Brown and Newsomehave caught a combined 97 passes for 1,533 yards for 13 touchdowns this season, earning high praise from Miami’s head coach.

“Their wideouts will be the best wide receivers we play this year,” Diaz said.

North Carolina is averaging 41 points per game this year and UNC has scored at least 45 points in five games. With productive and explosive players in both the running and passing games, the Tar Heels pose a unique threat for opposing defenses.

“The ability of them to put you in a stress because they have great backs that can run the football and then they do a great job with their RPO game trying to isolate,” Diaz said. “If you put too many guys up there to worry about the run, they can beat you with one on one’s down the field and Brown and Newsome are as good as anybody in the country at that. They both got speed to create big-time explosive plays and they go fast to try and create chaos and get you unnerved defensively.”

Diaz knows his defense will be tested on Saturday afternoon, but is confident the Hurricanes are up to the task.

“I think we’ve improved on our pass defense through the year. I think our connection of better communication in our secondary,” Diaz said. “We’re actually ranked No. 1 in the ACC in pass defense in terms of yards per pass attempt, a real way to measure it. … I don’t know if we’ve had a challenge like we have this week.

“So, we got to do a great job with our technique, of our communication and you got to understand that those guys are going to make plays too,” Diaz added. “So, like all DB’s, you’ve got to have a short memory. The ball is going to be deep and it’s going to be a one-on-one fight a lot of times down the field. No matter what coverage you’re in, they can dictate that by what they do. So, it’s a great challenge and I think our guys are pretty excited to go up against them.” 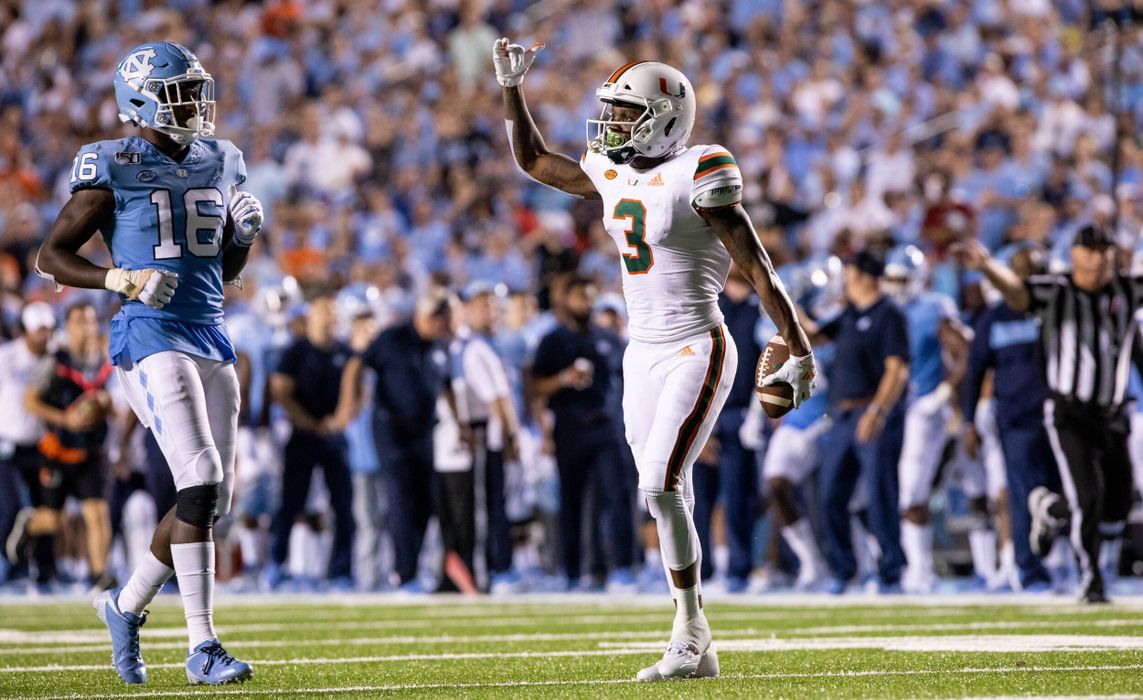 The Canes are coming off their first road shutout since 2000 (versus Syracuse) and their first shutout of a Power-5 opponent – also vs. Syracuse – since 2001. While the defense showed it can be stifling, Miami’s offense proved its ability to be explosive with a 48-point showing against the Blue Devils. Miami’s 48-point margin of victory was its largest ever in an ACC game, besting the previous high of 45, which had been done twice ever – against Wake Forest in 2004 (52-7) and Duke in 2005 (52-7).

UNC’s defense is allowing 28.6 points per game this season and Diaz knows the Tar Heels like to “do some exotic things on defense” to make things complicated for the opposing quarterback. In addition to being talented, the Tar Heels play with a confidence that has helped them rise to the top half of the ACC.

“They do the same thing with their defense, just try to create a lot of chaos,” Diaz said. “Get after your quarterback and challenge all the routes down the field, so I think it’s a combination. It’s what you would expect from really good football teams. A combination of some really good coaching and then there’s some good players and once they caught the belief then they’ve been in the top half of the conference since.”

North Carolina leads the all-time series by a narrow 12-11 margin; the two schools have met every single year since UM joined the ACC prior to 2004. 48 days will have elapsed between home game days for Miami when it hits the field on Dec. 12.

Miami is 4-0 at Hard Rock Stadium in 2020, with its last win coming on Oct. 24, 19-14, over Virginia. Roche, who is one of 12 seniors that will be recognized pregame as part of Miami’s Senior Day, has been one of many veterans making sure they Hurricane stay focused every week. Now that they are a top-10 team, the Canes have a target on their back, but Roche believes Miami has the right mindset to continue its success as the season winds down.

“There’s a lot of things we still have to play for,” Roche said. “This season has been a little different than any other year I’ve ever played football. This is a special group of guys. The guys in the locker room all love each other and all love playing together. We just have been fun have been playing. The season has been flying by. We’re excited to finish these last few games out and part of me coming here was to make sure the guys on the team are locked in and finishing strong. I think we’re going to finish strong and do a lot of good things moving forward.”