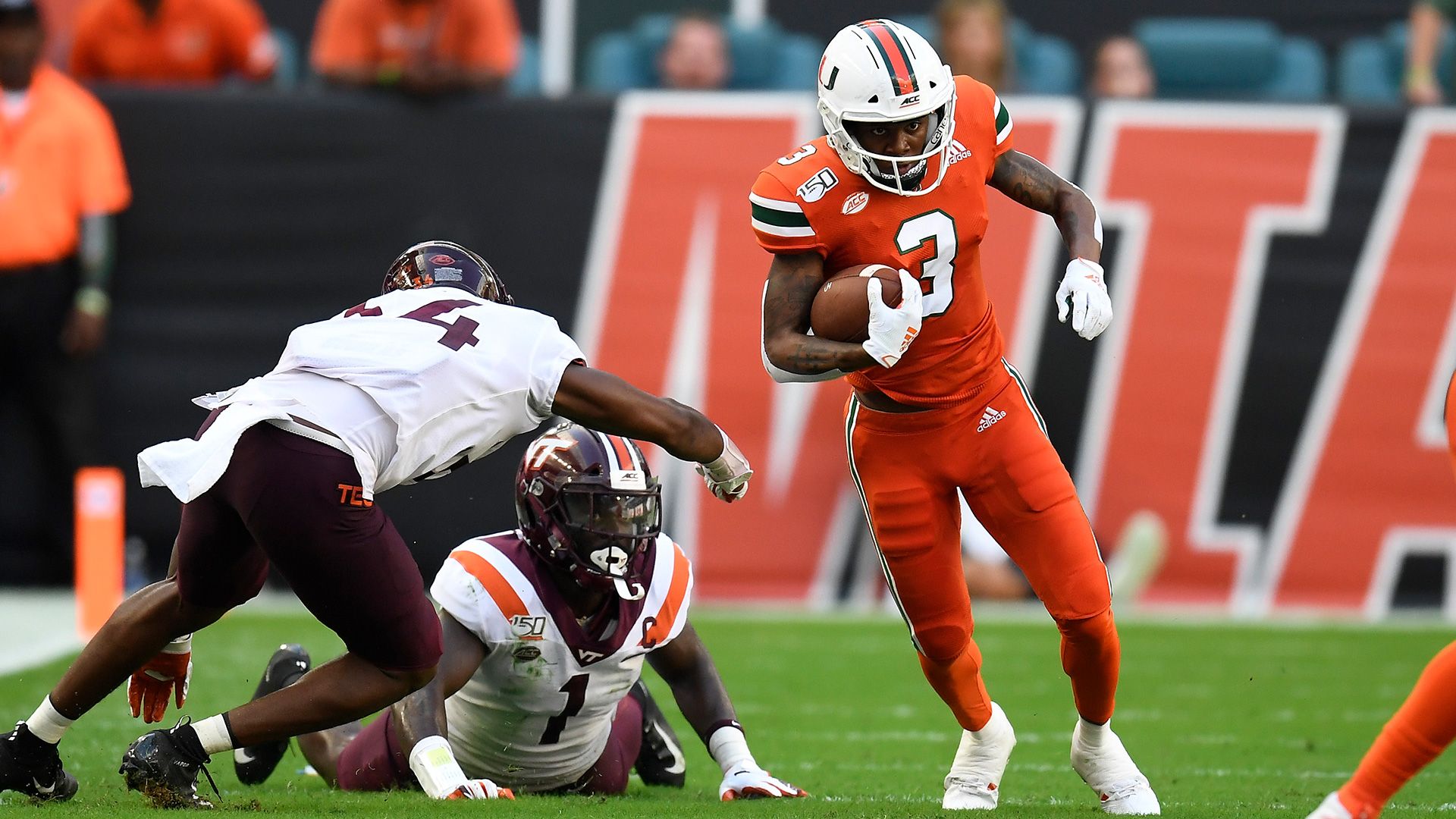 CORAL GABLES, Fla. – The Miami Hurricanes are off to their best start since 2017, but you wouldn’t know it by watching them work.

While the No. 9 Hurricanes are 6-1 and winners of three straight games, they are not getting complacent ahead of this week’s game at Virginia Tech (4-3, 4-2 ACC). Kickoff is set for noon on ESPN.

With a win Saturday, the Hurricanes (6-1, 5-1 ACC) would have at least seven wins in their first eight games for the second time in the last four years (2017, 2020). A victory also keeps the Canes alive in their quest for an appearance in the ACC Championship Game, but Miami knows it cannot get to the conference championship game in December without taking care of business in November.

“That’s what we talked about,” head coach Manny Diaz said. “I told them I called the ACC and asked them what the tiebreaker was and they said, “Go 1-0 this week.’ That’s all we can control. I’m joking of course when I say that, but nothing else matters. If we’re sitting around talking about what December is going to look like, we will get beat in November. Our guys have done a pretty good job with that. Every week we sort of pull the lens out and we sort of look where the league is and when we’re done talking about it, we don’t talk about it again for the rest of the week and everything goes into beat Virginia Tech, beat Virginia Tech. Winning on the road in the league, that will be enough for us to focus on in one week.”

Miami leads the all-time series, 22-15, and has won four of the last six matchups against the Hokies but beating Virginia Tech is no easy task. Just last season, Miami erased a 28-point deficit, but ultimately fell to VT, 42-35, inside Hard Rock Stadium.

The longtime foes have met every year since 1992 and the Hokies have a slight advantage on their home turf, going 8-7 in games played in Blacksburg, Va. Miami has won two of the last three matchups at Lane Stadium, including a 38-14 win in its last trip to Blacksburg in 2018.

The quarterbacks on both sides will be at the forefront of the 38th meeting between Miami and Virginia Tech.

Hendon Hooker is a big dual-threat player at 6-feet-4 and 225 pounds. The Hokies’ quarterback leads their offense, posting 870 passing yards and 515 rushing yards this season, but Miami remembers Hooker from his performance in last year’s contest.

“He gave them a lot of excitement, a shot in the arm in our game a year ago,” Diaz said. “I think he almost won every game when he took over until the very end of their season a year ago. Just a big, strong guy so number one he’s hard to tackle. We see that with D’Eriq [King] when the quarterback when you have to account for his legs, it really changes the way you play defense. And for me, this is our fifth year going against this staff. It’s a staff we have a lot of respect for, know what they’re doing coaching offensive football. When their quarterback is a runner, similar to what it was in 2016, their best year, it changes what they can do and it changes the way you got to play them. And his ability to fall forward and they have always been outstanding in red zone offense and they are again this year. He certainly has our respect from what we saw last year and what we saw on tape this year.”

For the Hurricanes, King has been the lynchpin for a Miami attack that has emerged as a force under the direction of offensive coordinator Rhett Lashlee. The redshirt senior has been named ACC Quarterback of the Week three times this season, including this week after putting together one of the best performances in Miami history in the win at NC State.

While King lit up the NC State secondary with his arm, throwing for 430 yards and five touchdowns, he also did a lot of damage with his legs by running for a team-high 105 rushing yards at NC State. It was only the third 400/100 game ever by an ACC quarterback. 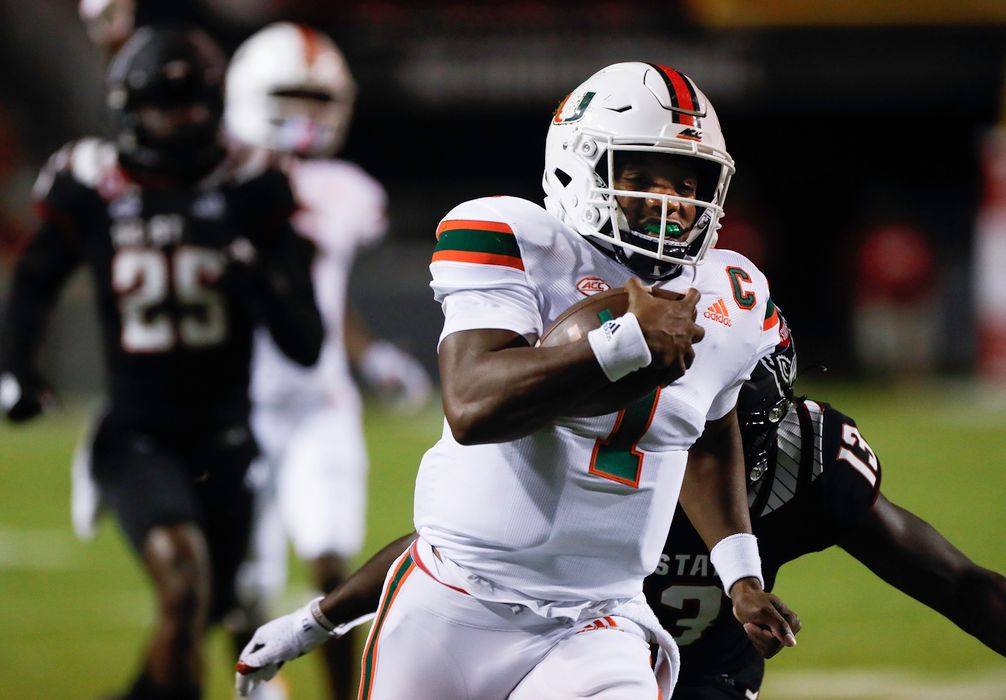 “I think he is getting better,” Lashlee said of King’s decision making in Miami’s zone-read scheme. “It is more of a feel thing. Anybody can run zone-read and read it and give it when you are supposed to, but when you are talented at it like he can be, it is more of a feel thing and I think he is starting to get a good feel for it… He was able to pull the ball on reads more than he ever has this year because of their scheme.”

King leads UM’s offense in 2020, throwing for 1,831 yards and 16 touchdowns while rushing for 406 yards and two touchdowns. Those numbers lead the ACC in total offense at 319 yards per game. In addition to his passing skills, his ability to be a threat on the ground could be very beneficial against a Virginia Tech defense that is allowing 202 rushing yards per game this season.

“Does he need to carry it 15 times for us to win? No,” Lashlee said. “Are there some games where that will happen? Maybe. With his ability, he will create some things for himself…It doesn’t all need to fall on D’Eriq’s shoulders.”

That is where King’s offensive weapons come into play.

Mike Harley leads a receiving corps that has elevated its performance in recent weeks. The senior has won ACC Receiver of the Week following each of Miami’s last two games and ranks 10th in the ACC with 497 yards.

“Mike, along with that whole group, has worked really hard,” Lashlee said. ‘And when you work really hard at something and when the first half of the season isn’t going the way you want from a production standpoint and they hear all of the outside noise and when you’re working really hard and doing everything you’re supposed to do to have the production you want and it’s not coming, that’s tough and I credit Mike and all of those guys, (Mark) Pope, (Dee) Wiggins, (Jeremiah) Payton, the tight ends, the young receivers and D’Eriq of just pushing through all of that and continuing to work, trusting the process, and knowing that if you keep doing the right things over and over again, you have a chance to be successful.”

While Harley paced all receivers with eight catches for 153 yards and two touchdowns at NC State, Wiggins (7 catches, 77 yards 1 TD) and Pope (6 catches, 97 yards, 1 TD) also showed they can be major factors when Miami looks their way.

“All three of us just came to an agreement and just told each other we’ve got to put this team on our back,” Pope said. “We’re too good of players so we had to do something. We had to make a change and that’s what we’ve been doing these last two weeks.”

The NC State game was a breakout performance for the wideouts, but tight end Will Mallory has been a big weapon in each of Miami’s last three games. The junior has totaled at least 50 yards in each of the three contests – including a season-best 78 last week at NC State – and has three touchdowns in that stretch.

“I think the confidence in our passing game is the biggest story of the last two weeks,” Diaz said. “We are getting better and improving and we are not nearly where we need to be yet, even D’Eriq would be the first one to tell you that, but it is fun to see a Miami offense that can attack you downfield.”

Virginia Tech will do everything it can to keep Miami’s offense in check. The Hokies are paced on defense by DB Chamarri Conner (58 total tackles) and LB Rayshard Ashby (39 total tackles, 6.5 TFLs, three sacks).

“His movement skills are really special and he is getting better and better with the more that he plays each week. I think his best football is still to come.”

Miami’s defense will face a tough task on Saturday, as Hooker and the Hokies have the best rushing attack in the ACC. At 277.4 yards per game, Virginia Tech’s run offense ranks fourth nationally. Hooker is a threat with his legs and Khalil Herbert (803 rushing yards, six rushing TDs) is one of the top running backs in the conference. But it’s Virginia Tech’s offensive line that paves the way for the Hokies to do damage.

“Really outstanding…they like to lean on you and they mash on you with the double teams and that is going to be a challenge for the defensive tackles this week,” defensive coordinator Blake Baker said.

The Hurricanes will need their defensive line to step up against the VT offensive front. Defensive end Quincy Roche leads UM with ten tackles for loss and has added 2.5 sacks, while Jaelan Phillips is entering the week as the reigning ACC Defensive Lineman of the Week. Defensive tackle Nesta Jade Silvera has been a force in his third season in Coral Gables, but the emergence of redshirt freshman Jared Harrison-Hunte gives the Canes another difference-maker on the defensive line.

“We know he has great athleticism, which allows him to stay on his feet inside and he has great toughness,” Diaz said of Harrison-Hunte. “His movement skills are really special and he is getting better and better with the more that he plays each week. I think his best football is still to come.”

Safety Bubba Bolden leads Miami with 40 tackles, four tackles for loss, one sack, and one interception, but the Canes are coming off a tough defensive showing at NC State. The Wolfpack had 410 total yards and scored 34 of their 41 points on offense a week ago. Diaz expects his defense to bounce back this week at Virginia Tech and challenged them to be more consistent against the Hokies.

“We’re not where we normally are in our standard but were fourth in our conference in defensive yards per play,” Diaz said. “We’re fourth versus the rush. We’re actually No. 1 versus the pass in yards per pass attempt. But I think the reason we’re winning games is because we’re fourth in red zone and fourth in third down, so we’ve been good in some of the situational stuff, but two things can be true at once. We can be doing pretty good shape and still know we have room for improvement and they need to play more consistently and it’s time for certain position groups to play better.”