One Hundred Days In

One hundred days into the job, assistant women’s basketball coach Kelley Gibson is still all smiles.

“After being away from the game last year, being back on the court and being able to be involved has been so great,” Gibson said.

The Maryland native joined the Miami staff in July after spending the past year building the Sure Basketball Academy (SBA) in her hometown of Easton, Md. Gibson founded SBA as a way to shape the next generation through basketball and character development curriculum.

While she remains the president of SBA, Gibson is now working hard to shape a new bunch of basketball players: the 2020-21 Miami Hurricanes.

Gibson had the opportunity to see the Canes in action last season when she attended the Louisville and Syracuse games. What she saw from the team then, and what she sees in practice every day now, makes her excited for what is ahead.

“Last year, the Louisville game was not great, but to see the resiliency of the team to get up after getting knocked down, was huge,” Gibson said. “The strength is there; the resiliency is there. With leadership from the seniors and freshmen that are willing to work hard and learn, this team can really do some special things.” 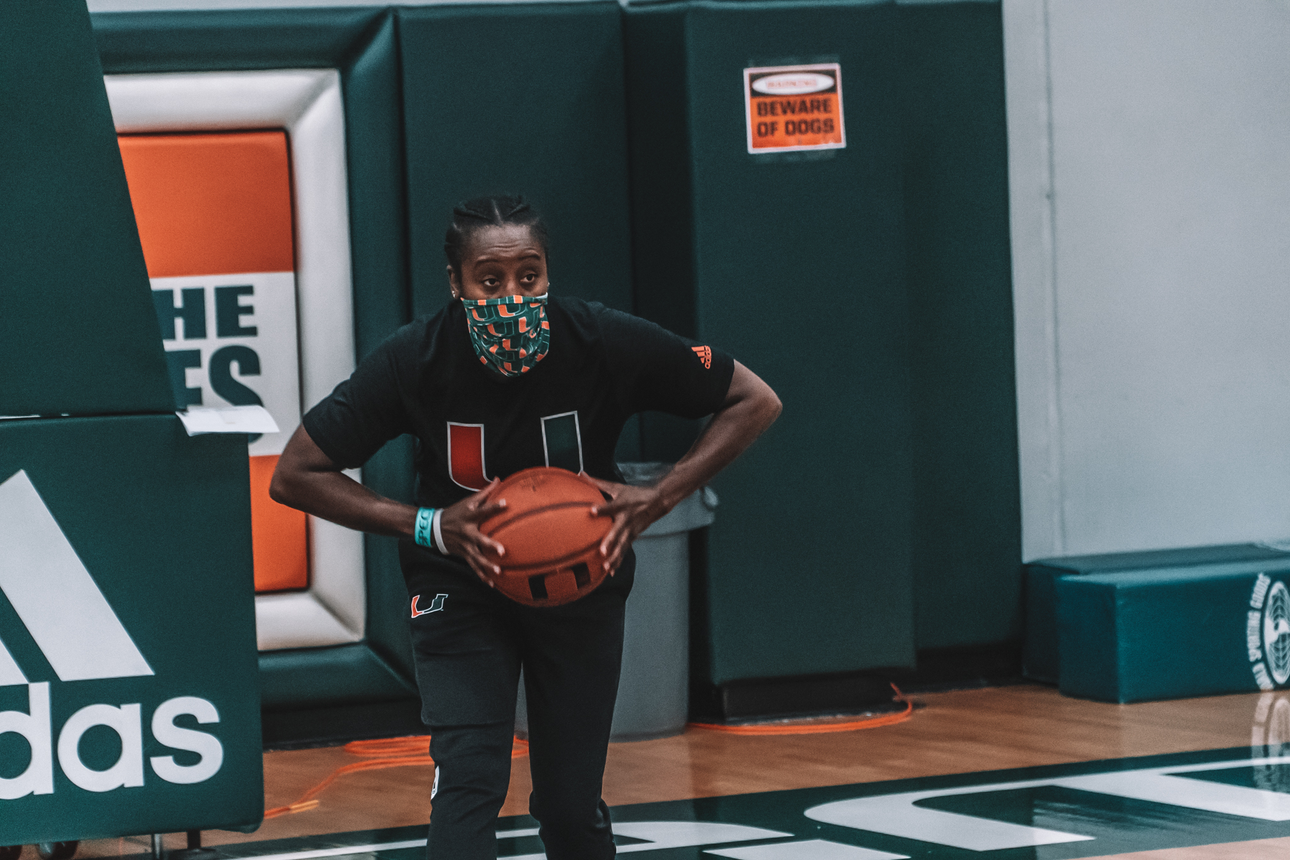 One of the biggest hurdles for Gibson so far has been learning head coach Katie Meier’s phraseology.

“I’m still learning [Meier’s] terminology and how she wants things done, but she is just phenomenal,” Gibson said. “She has such a fun personality and gives her assistants the opportunity to be very involved in every facet of the game.”

Gibson’s presence in practices has been felt by the staff and players alike.

“Coach Kelley’s knowledge of the game has definitely improved my knowledge on the court,” senior Taylor Mason said. “She also has a calmness to her that keeps me calm on the court, too.”

As the team continues to practice with the start of the 2020-21 season looming, Gibson knows that this group of Canes is something special.

“We’ve got pieces,” Gibson said. “We’re long, we’ve got a lot of versatility and it’s an open year in the ACC. It’s an opportunity to come into the season and win it. Why not us?”

An ACC standout at Maryland, Gibson knows what it takes to play at the highest level. She reminds the team to come into each practice with a growth mindset and the hunger to get better.

While the 2019-20 season did not turn out exactly the way the Canes anticipated, Gibson strongly knows that you can never underestimate what a team can do, so long as you believe in each other.

“It’s okay to have a bit of doubt, but you can’t let disbelief creep in,” Gibson said. “It all starts with belief in what you and the team can accomplish.”

Gibson believes in this team and is looking forward to seeing them perform on gameday.

“People always say, ‘It’s time to eat,’ but gameday is when it is truly time to eat,” Gibson said. “I’ll be all smiles and I can’t wait.”