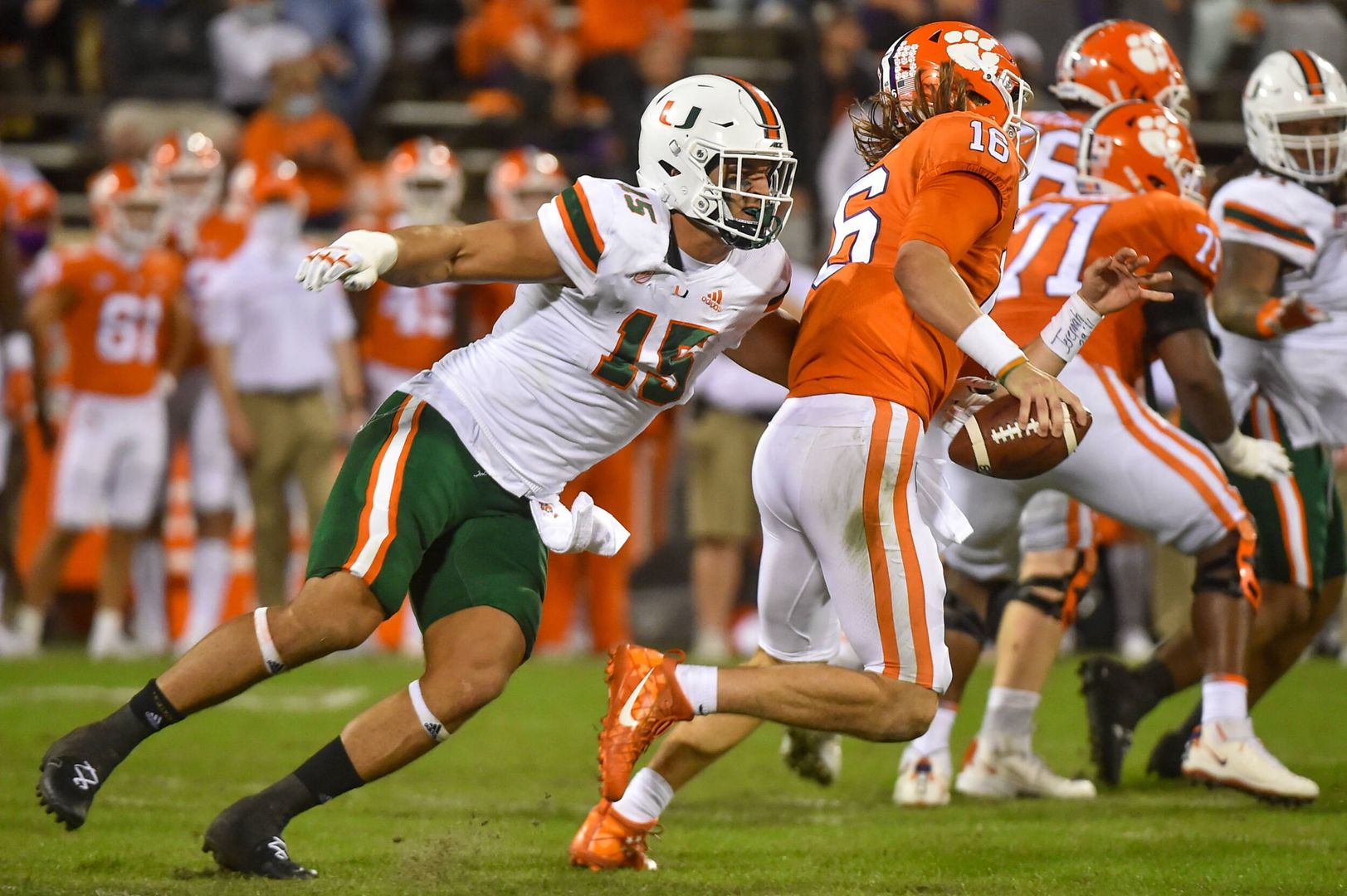 CLEMSON, S.C. – The Miami Hurricanes are tied for the most wins over a top-ranked team in FBS history, but they were unable to break that tie on Saturday night.

Miami was flagged 15 times for 135 yards on Saturday night, but a pivotal penalty on Clemson’s opening drive shifted momentum in a big way early in the game.

“First and foremost, I have to say congratulations to Clemson. They obviously thoroughly outplayed us tonight,” Miami head coach Manny Diaz said. “We are very disappointed in the way that we presented ourselves. I cannot fault our effort, but I thought our discipline, in terms of doing things right, made it very difficult for us to execute against a top-ranked team on the road. We have to own that, we have to go back and watch the film tomorrow and see why it looked like the way that it looked. But I do like the way that our guys stuck together. I liked the way that there was not a panic on the sideline, at halftime or anything. And we will build from this and we will put all of our focus on beating Pittsburgh next week.”

On fourth-and-1 from the UM 39, Miami defensive end Quincy Roche dropped into coverage and broke up a pass that seemingly had the Hurricanes defense off the field. But Roche was flagged for lining up offsides and the penalty gave Clemson a fresh set of downs. Two plays later, quarterback Trevor Lawrence connected with Braden Galloway for a 24-yard touchdown that gave Clemson a 7-0 lead.

Already missing safety Gurvan Hall for the first half due to a targeting penalty in the Florida State game, senior Amari Carter was disqualified after he was called for targeting when he hit Lawrence as the quarterback slid near the UM 40 on third-and-9 from the CU 49. The rush was negated by a Clemson holding penalty, but Carter’s targeting gave the Tigers an automatic first down and meant Miami would be without two of its top safeties for the rest of the first half.

“How many times have I said it in this setting, how it is difficult it is to officiate the targeting,” Diaz said. “I have never seen someone hit someone in the stomach and have that called for targeting. I mean, it is becoming very difficult to hit a quarterback now. And Amari, I thought it was very difficult on his, because I do think he was being pushed from behind, and I think Amari was trying to miss Trevor Lawrence. If Amari is not trying to miss you, it is going to be a big hit. And I have said over and over again, I do think there should be a way to have intent, like a flagrant 1 and a flagrant 2. The officials on the field, it is out of their hands.”

Clemson capitalized on the penalty and, nine plays later, running back Travis Etienne ran into the end zone from two yards out to double Clemson’s advantage, 14-0, just six seconds into the second quarter. The senior finished the night with 149 yards and two rushing touchdowns on 17 carries. Etienne also led Clemson in with eight catches for a team-high 73 receiving yards.

“Etienne, he’s a great back. I mean that’s why he’s the best in the country right now so, props to him,” safety Bubba Bolden said. “We just got to play out assignments better. We have to just go back and watch film and just correct the little things.”

The Canes picked up some momentum with 11:02 remaining in the opening half. The Tigers lined up for a 37-yard field goal try by kicker B.T. Potter, but Bolden sprinted around the edge and got a hand on the kick. The tipped kick was ruled a touchback and the Hurricanes took over possession on their own 20.

Miami’s offense made its first big play of the night on third-and-8 from its own 22. Hurricanes quarterback D’Eriq King exploded for a 56-yard rush to the Clemson 22, flipping the field and bringing the Canes deep into Tigers’ territory. Clemson’s defense held firm and Miami’s Jose Borregales drilled a 42-yard field goal to get the Canes on the scoreboard, 14-3, with 3:53 left in the first half.

Clemson answered with a six-play, 70-yard scoring drive that ended in an 11-yard touchdown pass from Lawrence to Galloway that marked the second touchdown connection for the pair and gave the Tigers a 21-3 lead with 1:14 remaining before halftime.

Miami went three-and-out on its ensuing possession, leaving the door open for Clemson to score again and the Tigers tried to do just that. Clemson sent Potter out to attempt a 61-yard field goal on the final play of the half, but Miami’s Jared Harrison-Hunte blocked the kick and junior DJ Ivey scooped the ball up and scored a touchdown to send the teams into the locker rooms with the score at 21-10 in favor of the Tigers.

The scoop and score off a blocked field goal was the first by the Hurricanes since Artie Burns blocked a field goal at North Carolina on Oct. 17, 2013 that was picked up by Ladarius Gunter and returned 67 yards for a touchdown in a 27-23 Miami victory.

After going three-and-out to open the second half, the Canes forced a turnover when Bolden drilled a scrambling Lawrence and jarred the ball loose. Gilbert Frierson recovered the fumble to earn the right to wear the Turnover Chain and gave the Hurricanes possession on the Clemson 39.

“This is a tough loss, but I know one game don’t define us,” Frierson said. “It is still a long season. We made a lot of mistakes out there. We just have to come in tomorrow, facing the film and just work a little harder. Find that next step of whatever we got to do.”

The Canes were driving towards the end zone, but Clemson made a play to thwart Miami’s momentum. On first-and-10 from the Clemson 26, King was intercepted in the end zone by Sheridan Jones and the touchback gave the Tigers the ball on their own 20. But Miami’s defense handled the sudden change well, forcing a punt after just five plays.

But the Tigers needed just one snap on their next possession to find the end zone, as Etienne bounced a counter outside and sprinted down the sideline for a 72-yard touchdown that gave Clemson an 18-point lead, 28-10.

Miami’s special teams blocked its third kick of the night, when Bolden got a hand on a 33-yard attempt by Potter for his second blocked field goal of the game. The ball landed in the arms of freshman Corey Flagg, who returned the blocked kick 13 yards to the UM 20. The three blocked kicks tied the FBS record for most blocked field goals in a game. South Alabama blocked three FAU field goals on Oct. 20, 2012.

While the blocked kick gave Miami momentum, it was short-lived as Clemson picked off King for a second time, with Derion Kendrick diving in front of a pass intended for Will Mallory to intercept the ball at the Miami 40.

The Canes had a second player disqualified for targeting, as Keontra Smith was removed from the game after a big hit on Lawrence on first-and-10 from the UM 47. Four plays later, Lawrence ran into the end zone from two yards out to put Clemson ahead, 35-10.

“The one on Keontra Smith, I struggle to think of another one that I have seen, similar, where you hit a guy where his helmet was. And obviously, we teach all of our guys with their eyes up,” Diaz said. “I have to get a closer look of what they saw.”

Despite facing a 25-point deficit in the fourth quarter, Miami refused to quit. King rushed for 11 yards before some trickery ended with a 42-yard completion from King to freshman receiver Keyshawn Smith that put the Canes at the Clemson 18. King finished the drive seven plays later, rushing into the end zone from seven yards out to make it 35-17 with 8:31 remaining to play. The redshirt senior QB led the Hurricanes with 84 rushing yards.

“A message to the team will be, ‘we just have to stay together and keep playing.’ I think it is easy to lead when everything is going good and you are winning,” King said. “I think the real leaders come out when things are hard. So, I think we will come back in tomorrow, watch the tape, be hard on myself and just keep trying to get better, stay together.”

The Tigers responded with a seven-play scoring drive that ended with Lawrence’s third passing touchdown of the game. The junior found tight end Davis Allen for a 22-yard touchdown that put Clemson back ahead by 25 points. Lawrence, who rushed for 34 yards and a score, completed 29of-41 pass attempts for 292 yards and three touchdowns on the night.

Miami backup quarterback N’Kosi Perry replaced King on the next UM possession, but the Tigers forced a third takeaway when Kane Patterson intercepted a pass to give Clemson the ball on the Miami 26 with 3:11 remaining in the game. Clemson ran out the clock the rest of the way to close out their first win over the Hurricanes inside Death Valley.

“Tonight was, as an offense, executing just from all cylinders of offensive football tonight, was our worst football,” tight end Brevin Jordan said. “We had a lot of mental mistakes. Some guys not getting out to the right blocks. Just all 11 men on the offensive side tonight, we just did not play our best brand of football. We did not play good. And I mean it showed, it showed definitely. But we have to get back to that drawing board, just keep going and focus on Pitt.”

Bolden led Miami with 10 tackles, including eight solo stops, and a forced fumble. The junior safety is determined to ensure the Hurricanes are focused on what’s in front of them and not dwelling on the result of Saturday’s game.