Ready for Our Moment

It’s about our city, our county, our entire South Florida region and all of Hurricanes Nation.

The moment we’ve all been waiting for is rapidly approaching.

When the ball kicks off at 8 p.m. tomorrow, the Miami Hurricanes officially begin a college football season that many were unsure would even happen this year.

Jimmy Butler and the Miami Heat even did their part, taking care of the Milwaukee Bucks on Tuesday to make sure all eyes were on The U on our big night.

And the Canes are ready.

They’ve sacrificed and adapted in the ever-changing world we currently live in. They’ve trained and practiced diligently in preparation for a season they are eager to play. They’ve focused on arriving at this moment and it is finally here.

While head coach Manny Diaz and his team are excited to kick off their 2020 football schedule Thursday night, they know the season opener against UAB means more than just another game on a schedule because of what it took to get to this point.

“We are very excited to be opening up our season Thursday night. This is an occasion we were not sure was going to happen and we’ve got to give a lot of credit first to our administration starting with the university president, our athletic department administration for clearing a pathway, an avenue for this to be able to happen,” Diaz said. “And then really the credit has got to go to our players who have been remarkable in the way that they take care of each other, take care of themselves and really since June 15th, when we first started coming back on campus, and the way that they protected the team and each other has been really cool to watch. And because of that we have an opportunity to play a very good UAB team on Thursday night.”

UAB already has a game under its belt in 2020, beating Central Arkansas 45-35 last Thursday, but their track record of success goes back a few years. Since the program returned in 2017, UAB has been the winningest team in Conference USA, compiling 29 total victories. The Blazers are back-to-back C-USA West Division champs and won the program’s first-ever C-USA title in 2018. UAB has been dominant against league action with an overall record of 20-6 vs. Conference USA and a mark of 16-2 vs. Conference USA West Division opponents.

“It’s a team that’s already played a game. A team that’s used to winning, 29-wins over the last three years, two division championships. I think second or third in the country in terms of the most returning production and experience. A very old team,” Diaz said. “Statistically, when you sort of look under the hood, they really don’t have a weakness. Pretty much everything they do, they do extraordinarily well, especially on the defensive side of the ball. A top ten defense the last two years. Third in the county in third down defense a year ago. You look at their numbers, yards per run, yards per pass, they’re good at all those things. A Bill Clark football team is always going to be very sound defensively, they’re going to tackle well. They’re going to make you earn everything, you know, man coverage, making things juts very difficult.

“On the other side of the ball, when they’ve got a quarterback who’s got 11 career wins. You have a running back who only Travis Etienne has more rushing yards in college football. He’s the second active career rushing leader in all of college football. Then they have a stable of other guys who had a big night in their opener. And then obviously with [Austin Watkins] on the other side, a guy who’s going to get a look at the Senior Bowl. Two tight ends that kind of went crazy last Thursday night. An offensive line that’s got four guys with double-digit starts. A team that’s used to winning and we have been preparing for them basically for the better part of the last two weeks. Our guys are excited to go play and then the fact that we will have some fans at Hard Rock Stadium. We didn’t know if we were going to have any, we didn’t know if we’d even be in Hard Rock Stadium. The fact that we’ll be able to be out there with some of our fans and see them again is exciting for all of our guys.” 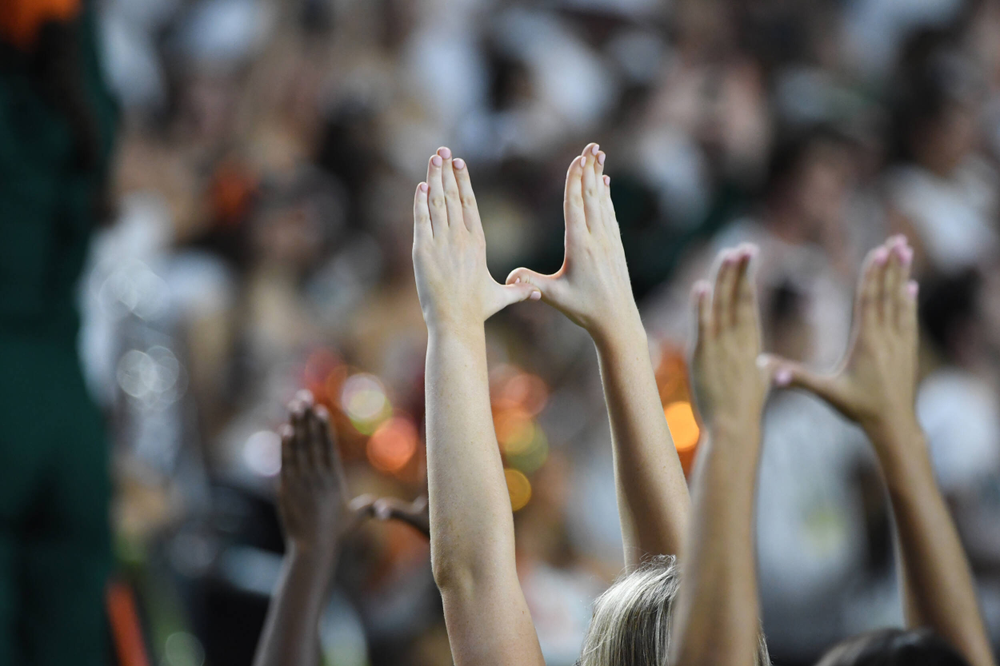 Miami’s fans have a lot to be excited about in 2020, as the Canes have a talented and deep roster filled with players hungry to succeed in a wide-open ACC Coastal division. The player Canes fans are most excited to see in orange and green is D’Eriq King, but it’s the redshirt senior who can’t wait to make his UM debut.

“A couple months ago, nobody thought we would be playing right now,” King said. “That God would give us the opportunity to go play the game on Thursday night, it’s the only game on, it’s a great feeling. Just playing for the University of Miami, like I always say, there’s a lot of history behind the program, a lot of good players have put the uniform on and put his helmet on, so it is an honor for me to go out there and just play my first game.”

King is worth the hype, as the former University of Houston star finished Friday’s scrimmage completing 24-of-34 passes for 330 yards with six touchdown passes. He also added 94 rushing yards on nine carries. But his impact on a program goes beyond statistical greatness.

“I just love the way he interacts with the players on the team,” Diaz said on The Joe Rose Show. “There is the ball stuff and what he can do playing quarterback, but it is things like after practice I always see him hanging out with three or four guys and it is always a different group of guys. Last night it was offensive linemen then the day before that it was defensive players. He is just a quarterback that seems to draw people towards him. He has great leadership ability, but it is not over, ‘rah-rah’ Hollywood speech. He is someone that really brings our team together.”

"A lot of good players have put the uniform on and put his helmet on, so it is an honor for me to go out there and just play my first game."

Another must-see item for Canes fan is the high-octane offense that new offensive coordinator Rhett Lashlee has implemented. A year ago at SMU, Lashlee’s offense ranked in the top 10 nationally in points per game, yards per game and plays per game. For veterans like senior receiver Mike Harley, there is one key to success in Lashlee’s system.

“This new offense is just one-on-one and win your battle and out-tough your opponent mentally and physically,” Harley said. “Just make that play.”

King’s passing ability will certainly be on display with the Brevin Jordan-Will Mallory two-headed monster at tight end and a deep receving corps providing plenty of weapons for the new quarterback to use. But one of the most impressive players since Lashlee’s arrival is veteran Mark Pope, who has emerged as a potential star.

“It has been fun to watch. Mark is obviously a very talented player,” Diaz said. “I think what we are doing offensively is to get guys like him in position to make big plays. I think his confidence level is at a different place than it was…Pope has great speed and that should be a threat to the defense.”

The Hurricanes also have an intriguing stable of running backs that are going to open eyes in Lashlee’s scheme. Freshman Jaylan Knighton and Donald Chaney Jr. are the newcomers who add new flair to the group, but it’s junior Cam’Ron Harris that will lead the way on the ground for the Canes. 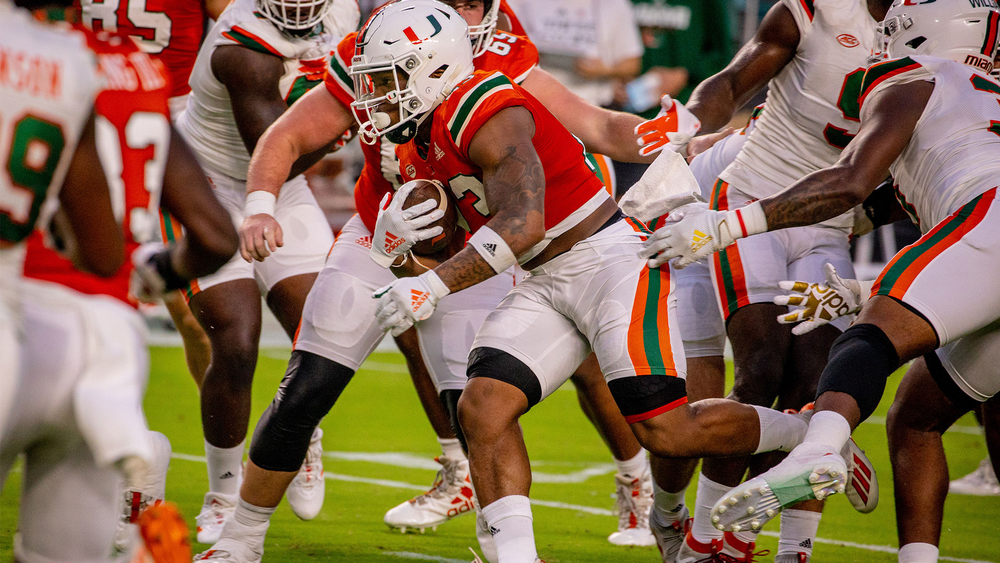 Cam'Ron Harris rushed for 576 yards on 114 carries and scored five rushing touchdowns as a sophomore in 2019.

Defensively, Miami is sure to terrorize opponents behind the line of scrimmage. The Canes reloaded at defensive end, with graduate transfer Quincy Roche and former UCLA transfer Jaelan Phillips lining up on the edges. Add in redshirt freshmen Jahfari Harvey and Cam Williams, as well as true freshman Chantz Williams, and the Hurricanes might have the most athletic defensive end group in the country and those guys love to get after the quarterback.

At linebacker, some familiar names will lead the way. Fifth-year senior Zach McCloud and redshirt junior Bradley Jennings Jr. are set to start for the Canes in the linebacker spots and Diaz has high expectations for Jennings as he steps into a starting role for the first time.

“Bradley, since he’s been here, has been neck and neck with [Shaq Quarterman] in terms of who the biggest hitters are on our football team. Shaq was always a very physical presence at middle linebacker and BJ wasn’t very far behind. We got some big hitters on our team. Zach McCloud is a big hitter, Amari Carter is of course, but I’m talking about in the box, really lay the thump on some dudes.”

Jennings, who recovered from a hip injury that held him out of the 2019 season, looks like the explosive player that arrived on campus in 2017. He is also very familiar with Miami’s defense and that will be important as the Canes will have two new starters at linebacker for the first time in four years.

“Having that experience when you think about the weirdness of losing two four-year starters in [Michael Pinckney] and Shaq at MIKE and WILL and you still say, “Well, gosh” and all of sudden you replace them with a guy that’s your fifth year in the program and a guy that’s your fourth year in the program, that just kind of helps us not lose a beat,” Diaz added. “We also think we got some super talented guys continuing to develop behind them.”

The Canes have some very exciting depth at striker and safety. Miami names co-starters at both safety positions, as well as striker, and fans can expect to see a lot of big plays made by whoever mans those positions.

“Probably some of the toughest ones were striker with Gilbert Frierson and Keontra Smith. I think both of those guys have earned the right to call themselves a starter,” Diaz said. “Safety for sure with Gurvan Hall and Amari Carter. I think all three of those guys are all starters and will all play a lot. Those were definitely the two I would say most highly contested battle and battle’s that really had no loser, which is great for us and great for our depth.”

The excitement level surrounding the return of Canes football is surging, but Thursday is just game one. Diaz and the Canes are sure to encounter adversity over the course of the season, but they are not worrying about that now. They refuse to look ahead. They are focused on the present.

“This year is going to be a long year. It’s going to be a marathon,” Diaz said. “We know there’s going to be all kinds of uncertainty of what we’re going to go on between now and December. If there has ever been a year where the cliché, ‘One week at a time’ is true, 2020 is the year for that.”