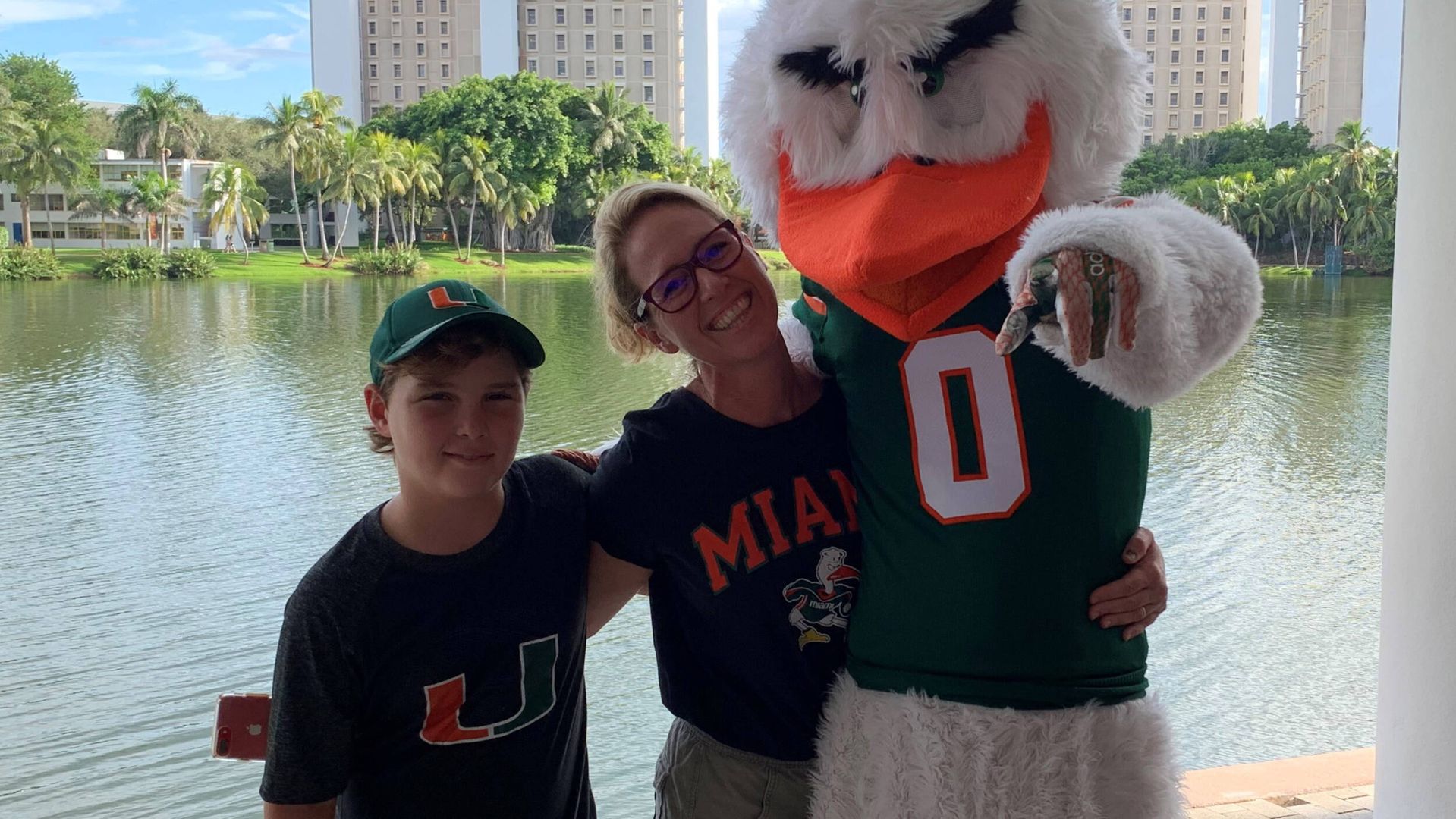 “Whoever can make it, makes it.”

For Christie Wolfe, her husband Jeffrey and their sons, Jake and Aiden, Miami Hurricanes football games are written into the fall schedule with a Sharpie, not a pencil.

Even with a busy lifestyle – as business owners in Coral Gables and as parents of two teenage sons – Christie and Jeffrey have been firm in their commitment.

“You never know when kickoff is going to be,” Christie said. “It’s hard for my husband to make a 3 p.m. game and for us to go early enough for any pregame experience. With the kids having sports, it’s again very hard to make it there in time to tailgate. But we made every home game last year.”

For the Wolfes, the bedstone of the fall calendar is Hard Rock Stadium.

“What I always tell our kids is, ‘You can invite your friends if dad can’t make it.’ This is our plan. This is what we do,” Christie said. “To have my kids have that foundation is very important for us. Having that plan, your kids can count on it.”

Born in Palm Beach County, Christie grew up on Miami Beach. She remembers attending games at the Orange Bowl as a high school student, and can never remember a time where she wasn’t rooting for The U.

Now, she shares that experience with her own family – with the ever important mantra: whoever can make it, makes it.

“I’m so happy I took the plunge and got season tickets,” she said. “I wish I would have done it sooner. As a mom of two boys, it’s an incredible way to bring us together and do something together, be with each other and have a plan.”

Why is Roy Wasson a Miami Hurricanes fan?

The answer is simple: he’s from Texas.

“It’s the football capital of the world,” Wasson said. “After I moved to Miami in 1981, I had no affiliation to any other university, so naturally I rooted for the Hurricanes.”

Roy has been a season ticket holder for 31 years, having first signed on for their four seats in 1989. He and his wife, Carol, live in Coral Gables.

Even when the Hurricanes moved from the Orange Bowl to what is now Hard Rock Stadium, Roy kept his seats – literally. His son, Michael, ripped his seat out of the stadium after the last game in 2007. Michael has passed his fandom to Roy’s grandson, Lucas.

“I hope the statute of limitations has expired on that one,” he said with a laugh. “The Orange Bowl was special. But there were long lines at the bathroom and don’t forget the concrete chunks falling off the upper deck – luckily we were in the upper deck, so that never affected us.”

Roy used to sit in the second row of the upper deck at the iconic stadium, right above the “The City of Miami Welcomes You” sign. Old habits die hard; Roy said he still reverts back to his Orange Bowl ways when the Hurricanes are in need of a big stop on Saturdays at Hard Rock Stadium.

“Our section would start banging that metal sign so loudly, the other team could not hear the signals and the opposing quarterback would have to step back and call timeout,” he said. “Even if they could hear, the loud sign-banging often disrupted the play. Now, when the Canes need a boost on defense and the other team is lining-up for the snap, I find myself yelling out to my surrounding fans, ‘Bang the sign! Bang the sign!’

“Even though there is no sign to bang, I think it still helps somehow.”

If it wasn’t for a chance recruiting visit to the northeast, Bill Frantz would never have ended up at The U.

Though he was one of the best high school football players in his area in New Jersey, both of Frantz’ parents passed away during his senior year of high school. That left Frantz working at a gas station while taking care of his 14-year-old brother, Ken.

When Frantz’ high school head coach suggested that Miami’s coaches, including the legendary Walt Kichefski, pay a visit to that gas station, Frantz was offered more than just a scholarship – he was offered a family.

“My father moved to Miami and didn’t know anybody,” Joan Frantz Richards said. “Coach Kichefski and the Hurricanes staff made sure every single holiday, my father had a home to go to – Christmas, Easter, whatever it was. They literally became his family.”

“Bulldog” Frantz was a captain on the Miami Hurricanes team that defeated Holy Cross in the 1946 Orange Bowl.  After growing up in New Jersey, where her dad had raised the family as a physical education teacher and coach at Haddonfield High School, Joan and her husband, Dick, moved to Florida when Dick was finished playing professional baseball.

“I had tears streaming down my face as I’m leaving our last game at the Orange Bowl in 2007,” she said. “Not because we lost, but because I knew there would never be any more games there, which is where my dad played.”

Now, the couple resides in western Miramar. They attend every Miami home game, usually alongside their son, Bill and grandson, Christian.

“When we go to the games now, it’s almost like my dad is with us…we owe it all to the Canes,” Joan said. “They made my father have a family when he had none.”