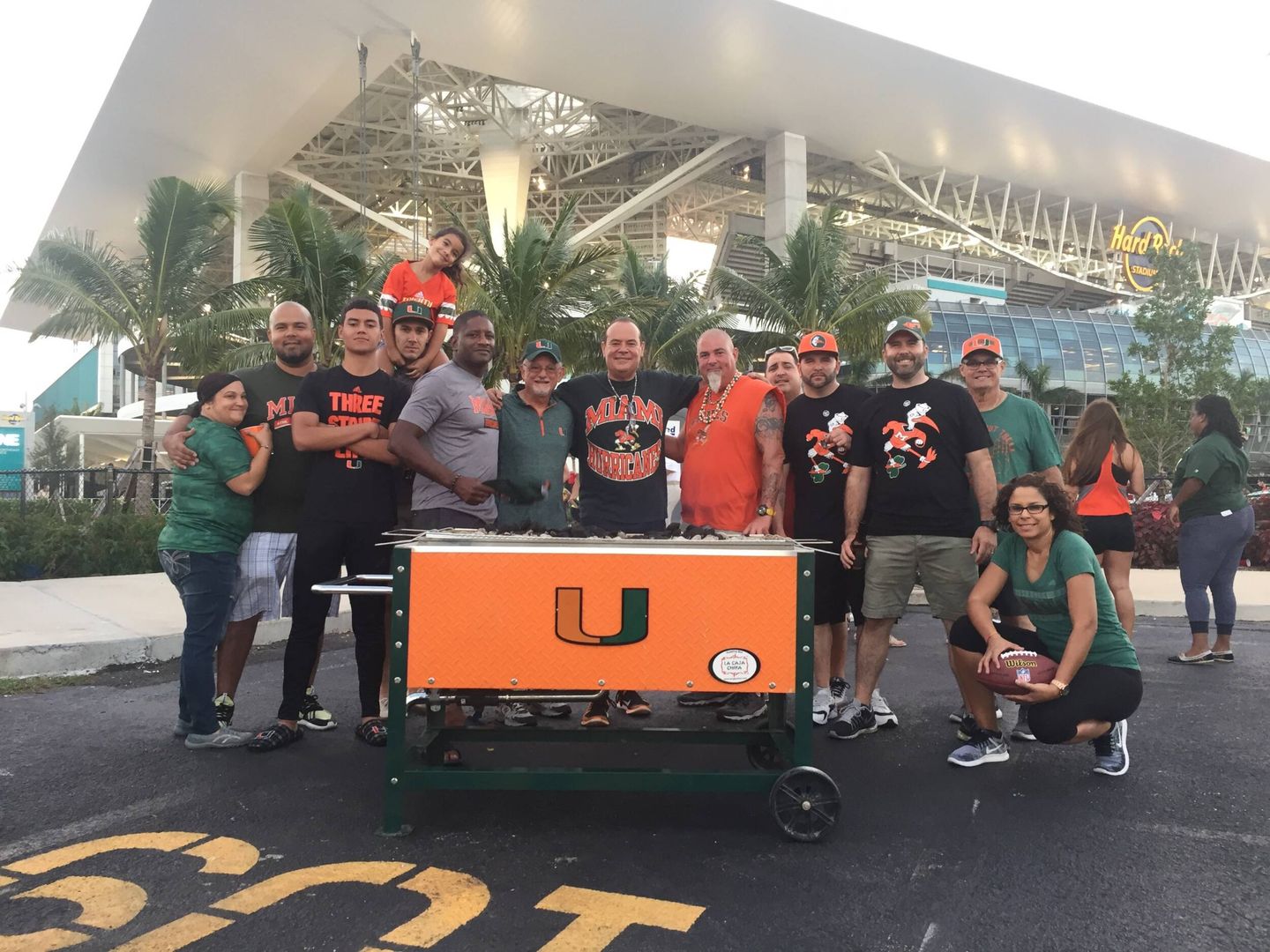 Don’t blame Ana Aguiar – she didn’t know it would be a night game.

It was September 21, 2013 and for her husband’s birthday, Ana had planned a special celebration. It went down as a 77-0 win over Savannah State – the only home game in nearly 30 years that her husband, Luis, has missed.

Needless to say, Ana learned her lesson and always checks the Hurricanes’ home and away dates before scheduling anything in the fall.

“I’m a native of Miami and I was born not too far from the campus,” Luis said. “When I was younger, I lived within walking distance of the Orange Bowl. When my parents had no money, we used to sneak into the OB and watch games…I have always been a Canes fan, since I was a kid. I’ve been attending games for the last 30-plus years.”

A full-on Aguiar Family tailgate includes a caja china (decked out in a turnover chain) and usually draws between 40 or 50 people for big games, like Florida State. All three of the Aguiar children – Alexander, Anthony and Katherine – have attended Canes games since they were infants.

“It’s everything. We look forward to Saturdays in the fall,” Luis said. “If there’s a pig involved, we’ll have 30 people there. It’s just what we do. It’s Miami. Who else would do a pig roast at a stadium? Nobody.”

As a teenager growing up in North Carolina, Tammy Clabo wasn’t a big fan of any of the local programs.

But when she moved to Miami at the age of 17, her passion for the Hurricanes became a focal point of her life.

“My soon-to-be husband was a passionate UM fan forever,” she said. “We started going to the games. We’ve been going since the Orange Bowl. Over the years, it grew.”

Clabo, who now works in higher education, used to decorate her elementary school classrooms in orange and green. She had to stop the tradition when she started teaching high school, with each of the athletics’ programs having their own specific color schemes.

Now, she shares her love for the Hurricanes with her two sons, Justin and Gregory. The family attends games together in the fall.

“I told both of them they couldn’t date anyone who wasn’t a UM fan,” she said. “Anyone who knows me knows about my love for the Hurricanes.”

Ponciano Gari says the decision to support Miami was out of his hands from birth.

“My dreams, my aspirations, everything was centered around getting accepted into The U, graduating from The U and then continuing my support for the program I love so much,” he said.

Gari’s mother, Gloria, has worked for the university’s office of research administration for more than 40 years.

“I came back from the hospital in a UM onesie,” he said. “I didn’t have any other option when I was going through my college selection process. I applied to other schools, but once I got into Miami, there was never another choice.”

Gari, who now has two degrees from Miami, graduated with his master’s of science in business analytics and recently moved with his fiancé to Orlando, where he was recruited by a local startup.

“I’ll be driving down for all the home games this year,” he said. “I already worked it out with my boss. When it’s not football season, it’s brutal. I don’t know what to do myself.”

Tell Us Your Story

Seasoned Canes is a platform for season ticket holders to share their stories of supporting The U – from favorite moments to tailgate traditions to personal memories of rivalry games, now is your chance to share!