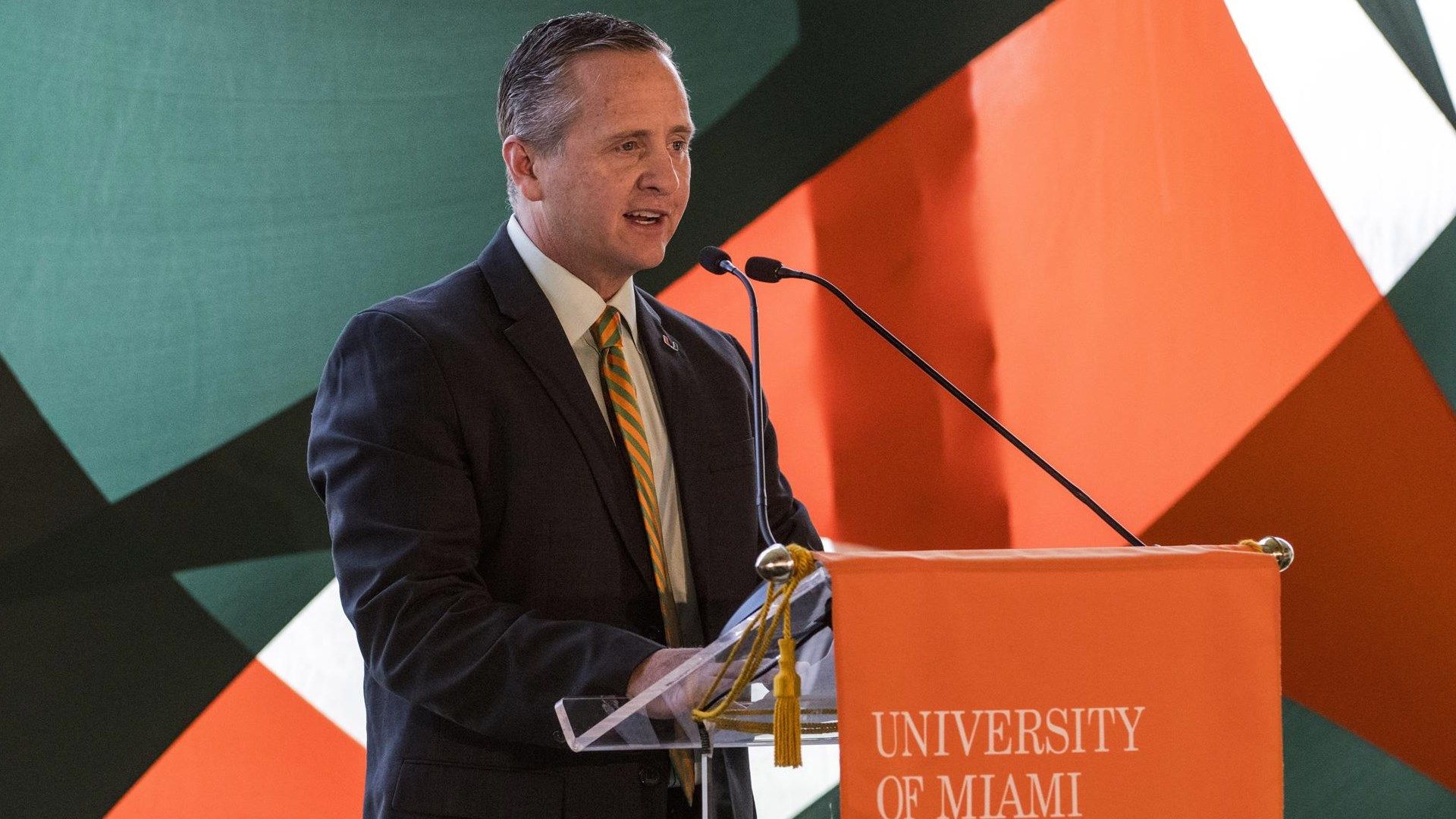 A Message From the Athletic Director - January 2020

We’ve had an exciting start to the new year – and the new decade – here at The U. Our winter sports are pushing towards the postseason, some of our spring sports have already launched their 2020 campaigns and our football team is making national headlines with several impressive moves on the staffing and personnel fronts.

Head coach Manny Diaz first announced Rhett Lashlee as our new offensive coordinator and quarterbacks coach. Rhett held the same position at SMU the past two seasons, helping the Mustangs rank seventh in the nation in scoring last season, ninth in total offense and third in plays per game. In addition, we welcome a new offensive line coach in Garin Justice, who most recently was the offensive coordinator and offensive line coach at UNLV.

We also added three graduate transfers in quarterback D’Eriq King, defensive end Quincy Roche and kicker Jose Borregales. King orchestrated a similar up-tempo offense at Houston, accounting for 3,656 total yards and 50 total touchdowns in 2018. Roche was the American Athletic Conference Defensive Player of the Year in 2019 at Temple after amassing 44 tackles, 18 TFLs and 13 sacks. Borregales connected on 50 of 66 FG attempts over three seasons at FIU, including three from 50-plus yards in 2019. These veteran newcomers, along with our 14 freshmen early enrollees, are already hard at work in strength and conditioning coach David Feeley’s offseason program.

Yesterday we announced that UM alumnus and College and Pro Football Hall of Famer Ed Reed will be our football program’s new Chief of Staff, assisting Manny in a number of phases, including strategic planning, quality control, operations, player evaluation and player development. We are thrilled to have Ed on board and I know our entire staff will benefit not only from his vast football experience but also his intense passion for this program.

Our 2020 schedule was released last week and we have seven home games at Hard Rock Stadium this season, starting with Temple on September 5. We kick off ACC play with Pittsburgh at home on October 3, followed by key home conference tilts against North Carolina (October 24), Florida State (November 7) and Duke (November 28). We need your continued support to ensure Hard Rock remains one of the best home field atmospheres in college football. Call 1-800-GO-CANES to renew or purchase your season tickets today!

Jim Larrañaga’s men’s basketball team picked up a big conference win Tuesday night at home against Virginia Tech. Five of our seven ACC losses have come to the league’s top three teams, all of whom are ranked in the Top 10 nationally. Next up for the Canes is a trip to Pittsburgh on Sunday, where we will be seeking a season sweep of the Panthers. Tipoff is at noon on ACC Network.

Katie Meier’s women’s team has been battling in conference play without Preseason ACC Player of the Year Beatrice Mompremier, who has been out since January 5 with a foot injury. But we rallied for a remarkable win at home last night, defeating Georgia Tech 54-49 in overtime after trailing by 18 at halftime. The Canes now head to Blacksburg Sunday for a 2 p.m. tilt with the Hokies on ACCNX. Make sure to tune into both our men’s and women’s basketball games on Super Bowl Sunday!

We will officially ring in the 2020 baseball season with our annual First Pitch Banquet at the Carol Soffer Indoor Practice Facility on Friday, February 7 at 6 p.m. Former Canes standout and current announcer for the World Series champion Washington Nationals, F.P. Santangelo, is this year’s keynote speaker. Click here for ticket information!

Gino DiMare’s squad has garnered five top 10 preseason rankings, including third in the nation by D1 Baseball and fourth by Collegiate Baseball. The Canes return three All-ACC players and boast the conference’s best incoming recruiting class. This 2020 home slate features a three-game series against Florida (February 21-23) as well as ACC series against top-ranked Louisville, Clemson, North Carolina and Virginia. It promises to be another magical season at The Light so reserve your season tickets by calling 1-800-GO-CANES today!

We recently announced a new fundraising campaign to help renovate facilities inside Alex Rodriguez Park at Mark Light Field. The $7 million campaign will help fund a new scoreboard, as well as renovations to the Hurricanes locker room players lounge and nutrition center. This marks the second phase of renovations, following the building of a state-of-the-art indoor practice facility that will house batting cages, bullpens and a multi-purpose area. I want to thank Jimmy and Kim Klotz for their naming rights gift for the indoor practice facility, as well as UM baseball alum Tommy Adams for his recent $1 million gift towards the campaign. For more information on how you can make a gift, please call the Hurricane Club at (305) 284-6699.

Defending NCAA singles champion Estela Perez-Somarriba made history this past weekend in Tallahassee, winning her 135thcareer singles match to pass Stephanie Wagner on our all-time wins list. Congratulations to Estela! The 23rd-ranked Canes bounced back to defeat UC-Santa Barbara at ITA Kickoff after a tough dual match loss to No. 18 Texas A&M. Aljosa Piric’s men’s tennis team also split its ITA Kickoff matches, falling to No. 13 Cal before rallying to defeat Tulane.

I want to extend my heartfelt appreciation to Wayne Boich and his family for his generous gift for the Boich Family Scoreboard at the Neil Schiff Tennis Center. We officially dedicated the scoreboard – one of the largest and most state of the art in collegiate tennis – at a ceremony with University President Dr. Julio Frenk on January 18. Thank you, Wayne!

Our swimming and diving team followed up a successful Senior Day against FGCU by splitting a tri-meet with Florida State and FAU this past weekend in Tallahassee. The ACC Championships commence in Greensboro on February 19. Good luck to the Canes!

Amy Deem’s track and field squad is off to a terrific start in its indoor season. Raheem Morris ran the nation’s fastest 60m time of the season at the Vanderbilt Invitational earlier this month. Next up is a stacked field at this weekend’s Texas Tech Invitational as the Canes continue to gear up to defend their women’s ACC Indoor Championships in South Bend in late February.

Patti Rizzo’s golf team tees off for the first time this spring Sunday at the UCF Invitational in Orlando. The Canes finished fourth in the ACC in average scoring in the fall, led by Renate Grimstad and Kristyna Frydlova, who ranked first and fifth in the conference, respectively. Good luck to our golfers in Orlando!

Our sixth annual Celebration of Women’s Athletics will be held at the Carol Soffer Indoor Practice Facility on Sunday, February 9, at 5 p.m. The CWA honors current Miami female student-athletes from each of our women’s programs for excellence on the playing field, as well as in the classroom and community. It also recognizes some of the pioneers who have helped pave the way for the continued success of women’s athletics at Miami. CBS4 reporter Lisa Petrillo will serve as this year’s emcee. The CWA has become one of our signature events and we hope to see you there! Click here for ticket information.

The ACC Network is providing us with a tremendous platform to help promote and showcase our teams, our student-athletes and our University to a wide audience. Providers across the country are carrying ACCN, including AT&T U-Verse, DIRECTV, Dish, Spectrum, NCTC, Fios, Google Fiber, Hulu, Sling, Optimum and YouTube TV. The lone major cable provider that isn’t carrying the network is Comcast, which has a large footprint in South Florida and throughout the Sunshine State. I encourage all Canes who have Comcast to call them and demand ACCN! We want everybody to be able to watch every Canes game for every sport this season.

The latest phase of construction for the Carol Soffer Indoor Practice Facility — our spectacular new football recruiting area — is nearly complete. I want to again extend my heartfelt thanks to Carol Soffer and her family for the lead gift for this magnificent facility. We have raised more than $37 million of the $40 million we need so we are not done yet — and we still need your support. One exciting way to give is an exclusive opportunity to have your name etched into one of the player chairs in the refurbished Edgerrin James Team Meeting Room. Your donations will continue to ensure that this facility continues to be one of the best in the country. Visit uhurricaneclub.com to pledge your support.

For the latest information on each of our varsity teams, please be sure to visit HurricaneSports.com or follow us on Twitter @MiamiHurricanes. I hope you enjoy this month’s magazine!