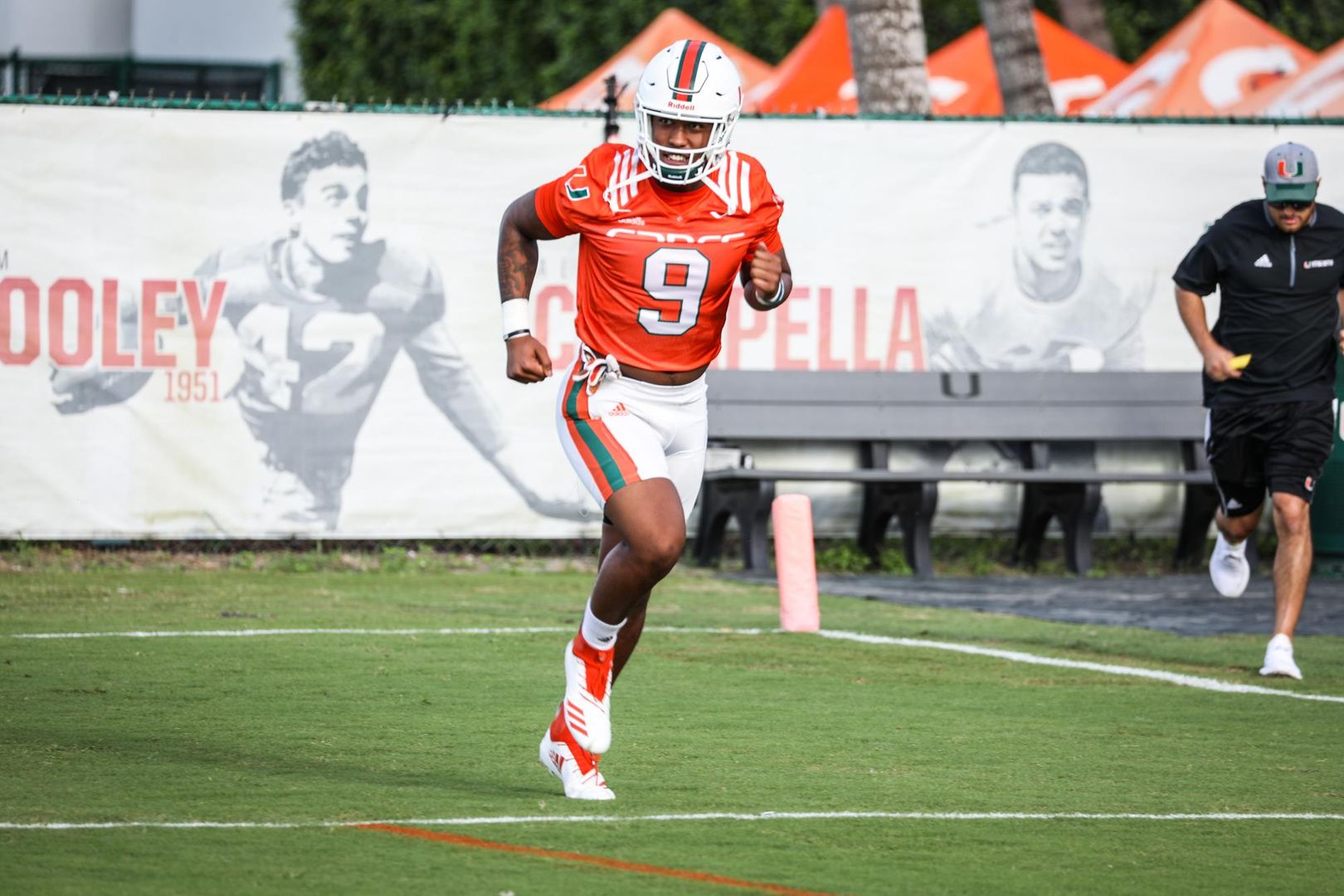 If the December hiring of Manny Diaz as Miami head coach provided a cafecito-like jolt into the Hurricanes fanbase, Diaz’s subsequent retooling of the offensive staff was akin to the entire colada.

Shortly after his introduction as head coach, Diaz hired Dan Enos away from national champion runner-up Alabama to serve as Hurricanes’ offensive coordinator and coach the Miami quarterbacks. Along with the new play-caller came offensive line coach Butch Barry, who served under Enos during his time as head coach at Central Michigan and was fresh off a four-year stint with the Tampa Bay Buccaneers. Two coaches with deep ties to the south Florida football community, tight ends coach Stephen Field and running backs coach Eric Hickson, were brought on from Oregon and Kansas State, respectively. And Taylor Stubblefield, who spent the past two seasons at Air Force and coached under Enos at CMU, was hired to lead a young-but-gifted receiver group.

The five new offensive coaches were not alone in their acclimation period to Coral Gables; of Miami’s seven scholarship newcomers for the spring, six were on the same side of the ball: OL Tommy Kennedy, QB Tate Martell, RB Asa Martin, OL Zion Nelson, WR KJ Osborn and WR Jeremiah Payton. That group joined a returning contingent that included the leaders in passing yards (QB N’Kosi Perry) and receiving yards (WR Jeff Thomas), as well as the second-leading rusher (RB DeeJay Dallas) from a season ago.

Where does that leave Miami heading into Tuesday’s opening spring practice? With a talented group of returners, an exciting contingent of newcomers and a coaching staff with an impressive collective acumen.

“Let’s be different, let’s shift, let’s motion, let’s use our groupings, let’s go fast, let’s go slow, and do those things,” Enos said to 560 WQAM upon his hiring. “I’ve always been wanting to do that — be multiple and give defenses things they have to practice against from week to week and get ready and get prepared for and spend time on.”

The first public words from Enos were like music to the ears of both Hurricanes fans and Diaz, who wanted his talented defensive contingent challenged for the spring.

“This is a process that you’ve got to see through. You’re really not just hiring one guy,” Diaz said. “You’re hiring a group of guys. I’ve said all along that a football staff is not fantasy football. You don’t just put guys together, put them in a room and expect stuff to happen. You want to make sure there’s great alignment along the staff.”

Miami’s quarterback room will benefit from the guidance of Enos, who spent the three seasons prior to last at Arkansas as offensive coordinator and quarterbacks coach. Joining Martell, who is awaiting the NCAA’s decision on his eligibility for 2019, is Perry, a redshirt sophomore who threw for 13 touchdowns and 1,091 yards in his debut season, as well as redshirt freshman Jarren Williams, who saw action in just one game in 2018 but was ranked the No. 106 prospect on the ESPN300 out of Lawrenceville, Ga.

“I’m really excited to be down here,” Martell said. “After meeting with Coach Enos and Coach Diaz when I came down here, I knew that this was the place I wanted to be. There’s just such a great vibe around the whole team right now. Everybody is working so hard this offseason. It’s fun to be around, because you see the guys want to be great.”

Of players who made multiple starts on the offensive line for the Hurricanes in 2018, only two are returning: junior Navaughn Donaldson (12 starts) and sophomore DJ Scaife, Jr. (seven). Donaldson started the first six games at right tackle before starting at right guard – where he was a Freshman All-American in 2017 – for six of UM’s final seven games. Scaife, Jr., joined the Hurricanes as an early enrollee in January 2018 and started the final seven games at right tackle. He enrolled alongside Cleveland Reed, Jr., and John Campbell, Jr., who both redshirted a season ago – both of whom figure to earn valuable reps in the spring. Kennedy signed with the Hurricanes over Texas and Oklahoma, among others, with hopes to start at one of the tackle spots, while other returners include redshirt sophomores Corey Gaynor, Kai-Leon Herbert and Zalon’tae Hillery. Redshirt senior George Brown, Jr., was forced to miss all of 2018 while recovering from surgery.

“It’s so great to be a part of a program that has so much excitement,” Kennedy said. “Everyone is jacked to see the 2019 Miami Hurricanes, and I’m fired up too.”

Travis Homer’s decision to forego his final year of eligibility was a blow largely lessened by the returners in the room; Dallas (634 yards, six touchdowns) is a vocal and emotional leader, sophomore Cam’ron Davis (166 yards, two touchdowns) enjoyed a breakout second half of 2018, and sophomore Lorenzo Lingard (136 yards, two touchdowns) provided a brief but exciting glimpse into his future before a leg injury caused him to miss the second half of the season. Competing alongside that group this spring will be Martin, who was a four-star running back out of Decatur, Ala., and won state player of the year honors.

Stubblefield enters in an exciting situation, benefiting from not only the return of juniors Thomas (563 yards, three touchdowns) and Mike Harley (21 catches, 240 yards), but the addition of Osborn, who was a game-changer during his time at Buffalo. Osborn is the elder statesman in a room that includes a trio of uber-talented sophomores (Dee Wiggins, Mark Pope and Brian Hightower), as well as a game-changing threat in Thomas and a reliable Harley, who has started nine games in his first two years and tied for third on the team last year in receptions. Payton, ranked No. 61 on the ESPN300 and regarded as one of the nation’s best wide receivers in the class of 2019, remained steadfast in his commitment and now gets a jumpstart on preparing for his first collegiate season as an early enrollee.

“I’m looking around and talking to guys that are all freshmen, and I’m like, ‘wow. This really is a young team,'” Osborn said upon his arrival. “When I came in, I wanted to be a leader but I didn’t want to step on anybody’s toes. At the same time, I’m looking around and there’s not really many upperclassmen. I’m helping lead the young guys. Not too much, but a little by little, just by example – my work ethic, showing how I work, the discipline, things like that.”

There was not a duo of true freshmen tight ends in 2018 more talented than Miami’s pair of Brevin Jordan and Will Mallory, and both will benefit immensely from their first spring together. Jordan caught 32 passes and ranked second with four touchdowns en route to second-team All-ACC honors, while Mallory came on late before suffering a November injury that kept him out of Miami’s regular season finale and the 2018 New Era Pinstripe Bowl. The Hurricanes could have used the veteran presence of Michael Irvin, Jr., in 2018, but he was forced to miss the regular season due to an injury suffered in fall camp. Miami returns every snap at the position for 2019, an exciting proposition for Fields and fellow offensive coaches.

“The main thing is the vision of the head coach and what he’s doing with the program,” Field said. “I can definitely see the dominance is going to come back.”