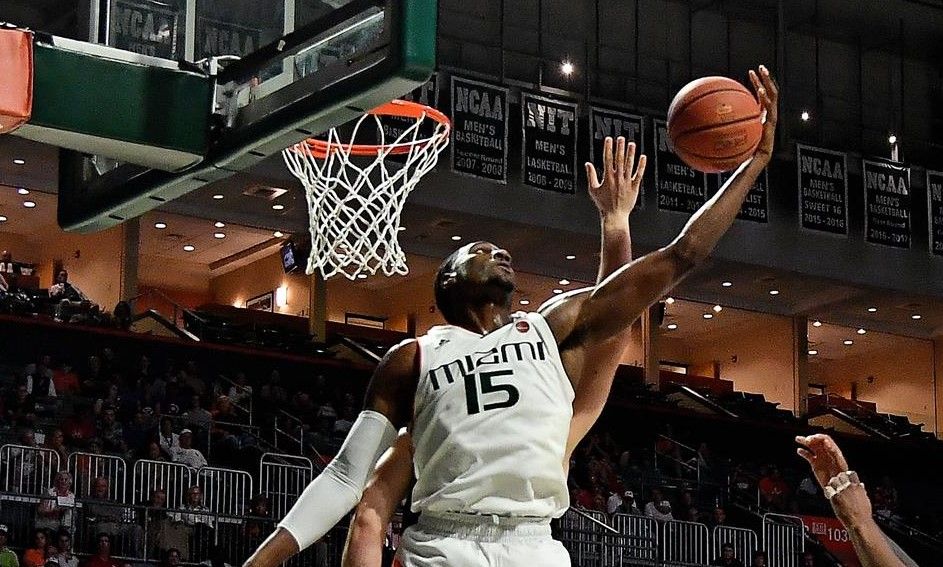 CORAL GABLES, Fla. – The University of Miami men’s basketball team returns home Sunday for a rivalry game against No. 23 Florida State at the Watsco Center. Game time is set for 6 p.m. on ESPNU.

Things To Know
• Miami’s next three games are against ranked teams.
• Miami is the only team among basketball’s six power conferences with five players averaging at least 11.6 ppg apiece.
• DJ Vasiljevic has hit at least one 3-pointer in 31 straight games – the longest current streak in the ACC – and needs to connect on one more 3-pointer to reach the career top 10 in 3-pointers at UM.
• Chris Lykes is eighth in the ACC in scoring (17.5) and fourth in conference play (19.3 ppg).
• UM has led in the second half in 16 of its 18 games.
• UM averages 8.8 3-pointers per game (third in ACC).
• Zach Johnson is one of 11 players nationally with 1,500 career points and 350 assists.
• Ebuka Izundu is third in the ACC in rebounding (9.4), and fourth in double-doubles (6).
• As a team Miami ranks seventh nationally in fewest fouls per game (14.3).
• Junior forward Dewan Hernandez has been withheld from competition thus far as the University and NCAA review his eligibility.

Miami (9-9, 1-5 ACC) was stymied Thursday in a 73-53 loss at Syracuse, recording a season low in points while shooting just 33.9 percent from the field. Vasiljevic was the lone Miami player to score in double figures, finishing with 11 points. Syracuse was hot from 3-point range, hitting 14-of-30 from behind the arc in pulling away for the win.

Ranked No. 23 nationally in the latest USA Today Coaches Poll, FSU (14-5, 2-4) snapped a three-game losing streak with a 77-68 home win over Clemson on Tuesday night. The Seminoles feature a deep roster, with 11 players averaging at least nine minutes per game. Mfiondu Kabengele leads FSU in scoring at 12.8 ppg, while Terance Mann is averaging 11.5 ppg and a team-best 6.4 rpg. As a team FSU averages 77.7 ppg and allows 69.8 ppg.

In the last meeting two-and-a-half weeks ago, Lykes scored 17 points while Lawrence added 14 points and Ebuka Izundu recorded 13 points and nine rebounds. After trailing by as many as 13 points in the second half, Miami rallied to cut its deficit to two points, 64-62, with 56 seconds remaining on a Johnson layup but FSU put the game away from there. Miami shot 37 percent (20-54) from the field and hit a season-low four 3-pointers, going 4-of-18 from 3-point range. FSU connected on 27-of-64 (42.2 percent) from the field was led by David Nichols with 13 points.

Miami has a challenging week ahead, with a pair of games against top-10 teams. The Canes host No. 10 Virginia Tech at 7 p.m. Wednesday before traveling to No. 3 Virginia next Saturday for a 2 p.m. contest.