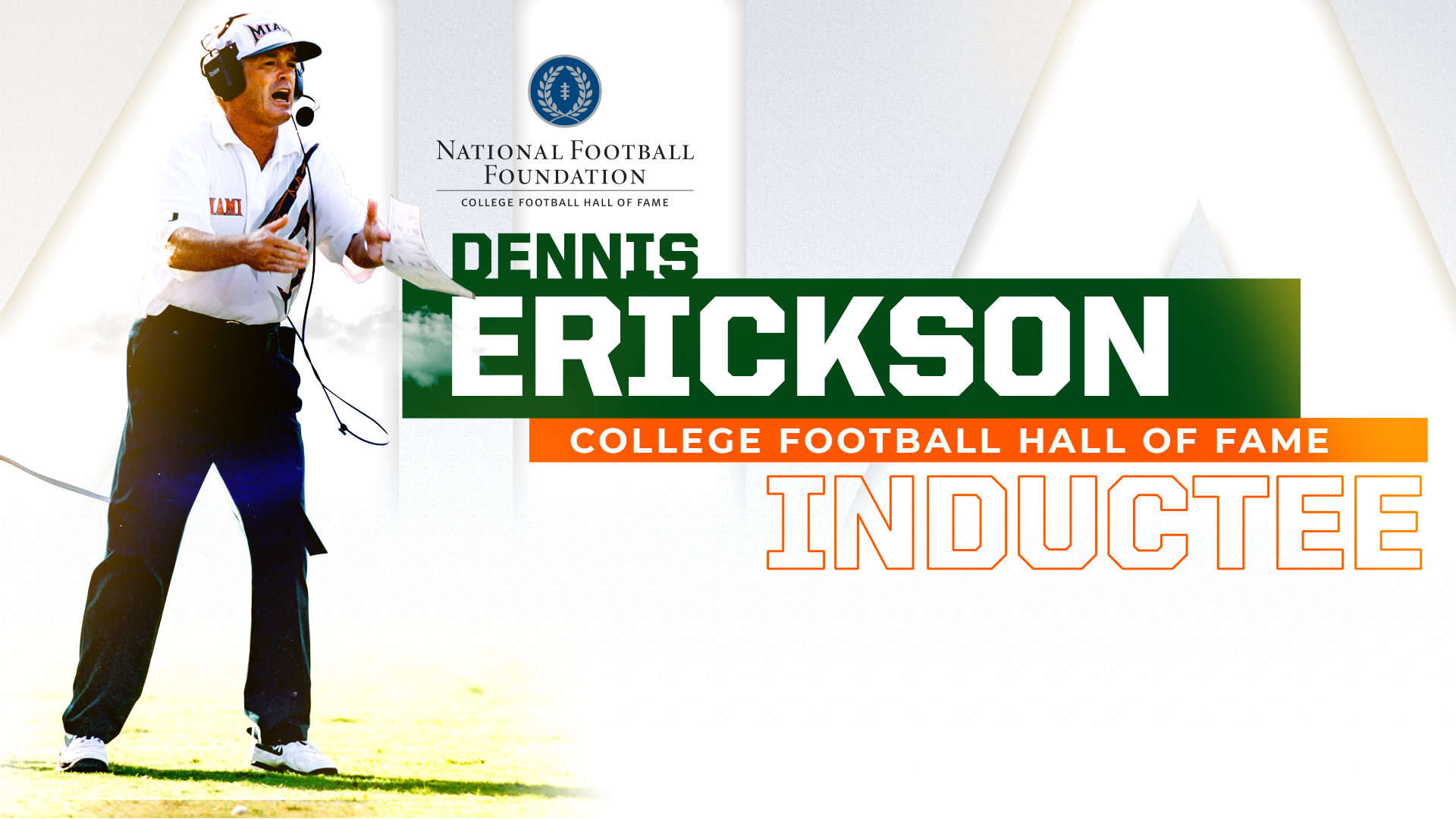 “Congratulations to Dennis Erickson on his election to the College Football Hall of Fame,” Director of Athletics Blake James said. “He led the Hurricanes to two national championships, and authored one of the most dominant stretches in college football history over his six seasons as our head coach. We are thrilled and honored to have Coach Erickson as the latest representative of The U in the College Football Hall of Fame.”

Highlighted by two national titles at Miami, Dennis Erickson led his teams to 12 bowl games and at least a share of six conference titles in 23 successful seasons as a head coach. In addition to his success with the Hurricanes, he became the first coach to earn Pac-12 Coach of the Year honors at three different institutions.

The announcement of the class was made today live on ESPN’s “SportsCenter” in Santa Clara, California, the site of the College Football Playoff (CFP) National Championship

“We are extremely proud to announce the 2019 College Football Hall of Fame Class,” said Archie Manning, NFF Chairman and a 1989 College Football Hall of Famer from Mississippi. “Each of these men has established himself among the absolute best to have ever played or coached the game, and we look forward to immortalizing their incredible accomplishments. The Class will be part of a momentous year as we celebrate the 150th anniversary of college football this season.”

Erickson would see his greatest success at Miami from 1989-94, posting a 63-9 record and an 87.5 winning percentage, which remains the highest in school history. The only coach to win two national titles at Miami, his Hurricanes took home the crown following the 1989 and 1991 seasons while playing in two other national championship games in 1992 and 1994. The 1989 national title earned Erickson the distinction of being only the second Division I head coach to win a national crown in his first season at a school. The 1991 Miami squad would be named national champion after becoming the second team in school history to finish 12-0. Erickson claimed conference coach of the year honors and guided the Canes to conference titles in three-of-four seasons after Miami joined the BIG EAST in 1991. Boasting a 35-1 home record at Miami, he led the team to bowl games in all six seasons and the Canes never finished lower than No. 3 in the final polls from 1989-92.

After a four-year stint as the head coach of the Seattle Seahawks, Erickson took over the program at Oregon State in 1999 and sparked a massive turnaround. In his first season, he led the Beavers to their first winning season in 29 years and their first bowl appearance in 35 years. Erickson’s best season at Oregon State came in 2000, when helped the program snap its 33-year losing streak to USC and earn a share of the Pac-10 Conference title for the first time since 1964. The Pac-10 Coach of the Year that season, he guided Oregon State to an 11-1 record, a win over Notre Dame in the Fiesta Bowl (the school’s first major bowl appearance since 1965) and the No. 4 final ranking (the highest finish in school history). Erickson’s 64.6 win percentage is the highest among Oregon State coaches with more than three seasons at the helm.

After two seasons as the head coach of the San Francisco 49ers and one return season at Idaho, Erickson took his final head-coaching job at Arizona State in 2007. In his first season, he once again claimed Pac-10 Coach of the Year honors after leading the Sun Devils to a 10-win season and a share of the Pac-10 title.

A native of Everett, Washington, Erickson was a two-time All-Big Sky quarterback while leading Montana State to three conference titles. Before his first head-coaching job at Idaho, he served as an assistant coach at Montana State, Idaho, Fresno State and San Jose State as well as one season as a high school head coach when he was just 23 years old. From 2013-16, Erickson came out of retirement to serve as an assistant coach at Utah. He is a member of the University of Miami Sports, State of Washington Sports and State of Montana Football halls of fame. Erickson has once again come out of retirement to be the head coach of the Salt Lake Stallions in the Alliance of American Football, a new professional league that will kick off in February 2019.

“We would like to thank CFP Executive Director Bill Hancock and his staff for the continued opportunity to announce the Hall of Fame Class in conjunction with the championship game,” said NFF President & CEO Steve Hatchell. “We are also grateful for the guidance, knowledge and vision of honors court chairmen Archie Griffin (FBS) and Jack Lengyel (divisional) for the essential role that they each play in guiding the committees in the selection of the inductees.”


ABOUT The National Football Foundation & College Hall of Fame
Founded in 1947 with early leadership from General Douglas MacArthur, legendary Army coach Earl “Red” Blaik and immortal journalist Grantland Rice, The National Football Foundation & College Hall of Fame is a non-profit educational organization that runs programs designed to use the power of amateur football in developing scholarship, citizenship and athletic achievement in young people. With 120 chapters and 12,000 members nationwide, NFF programs include Football Matters®, the Chick-fil-A College Football Hall of Fame in Atlanta, The William V. Campbell Trophy®, annual scholarships of more than $1.3 million and a series of initiatives to honor the legends of the past and inspire the leaders of the future. NFF corporate partners include Delta Air Lines, Fidelity Investments – a proud partner of the Campbell Trophy®, Herff Jones, New York Athletic Club, the Pasadena Tournament of Roses, the Sports Business Journal, SportsManias, Under Armour and VICIS. Learn more at footballfoundation.org.