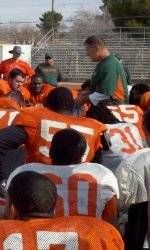 Miami’s match-up with Notre Dame in the Hyundai Sun Bowl is just four days away, as the `Canes and Irish will square off on Friday, Dec. 31 at 2 p.m. EST at Sun Bowl Stadium. The game will be televised on CBS.

“We’ve been practicing hard this week and the last couple weeks,” senior wide receiver Leonard Hankerson said. “We’ve been coming together, having fun and making the best of the situation. Us coming together as a team for this game is going to be a good thing for us.”

Monday’s practice was held under relatively cool conditions, with partly cloudy skies and temperatures in the lower 50’s throughout the session. The team split time between group and team drills, with a continued emphasis on special teams.

Fort Bliss families in attendance…
A few dozen families from El Paso’s Fort Bliss – a United States Army post that is the home to the Air Defense Artillery Center of Excellence – were in attendance on Monday’s practice.

Among the military personnel in attendance at Monday’s practice were Sergeant Miguel Leon, a native of Miami Lakes, and Lieutenant Colonel Dan O’Grady.

“It is great to see my hometown team here in El Paso,” Leon said. “Been in the military for 10 years and it is just finally good to have them out this way. I’m looking forward to see them represent South Florida in the Sun Bowl.”

O’Grady, a 1990 graduate and ROTC member at the University of Miami, has been serving since he finished school and is married to former UM swimmer Kathy Cruciger.

No QB decision yet…
Miami’s starter for the Sun Bowl has yet to be announced. Junior Jacory Harris and freshman Stephen Morris each took first team reps again Monday, as they have throughout bowl practices over the last few weeks. A decision is expected in the next few days.

Some practice highlights….
– A spirited offense vs. defense end zone drill that saw the defense with a big stop on a Travis Benjamin pattern before Leonard Hankerson caught a one-handed grab in the back of the end zone for a touchdown.

– Tommy Streeter caught a deep curl pass coming out the offense’s zone and when he went to turn up field, Devont’a Davis got a big hit on him that excited his defensive teammates. Streeter did, however, hold onto the ball for the big gain.

– Kendal Thompkins caught a long pass from Stephen Morris down the left sideline in the same drill coming out of the endzone.

– Storm Johnson had a big run in 11-on-11 early work, making a handful of defenders for a 15-20 yard gain before the whistle blew.

– Olivier Vernon had one of the better practices on the defensive side of the ball, recording a sack late in the session.

UTEP coaches stop by…
UTEP head football coach Mike Price – along with several members of his coaching staff – were in attendance at Miami’s practice on Monday. Burges High School is approximately nine miles from the UTEP campus.

Upcoming schedule….
The `Canes will spend Monday afternoon at several different stops in El Paso. First, the team will visit a local hospital where the student-athletes and coaches will spend time with patients as well as sign autographs before the buses will make a shopping trip to the world famous Lucchese Boots store.

Miami will return to practice on Tuesday at 10:15 a.m. at Burges.