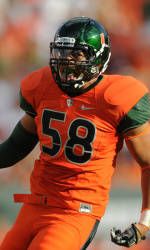 CORAL GABLES, Fla. – If there was any concern over how enthused the Hurricanes are to be playing Notre Dame in the Sun Bowl, the last two days of practice have quickly put those reservations to bed.

Miami held another spirited practice on Greentree Sunday morning, with competition being the main focus as the team continues its bowl preparation.

“It was good,” interim head coach Jeff Stoutland said of Sunday’s practice. “It was better than yesterday. If we can get that much better every day, we’ll be in great shape.

“Everything is full speed,” Stoutland added. “Every drill we do…it’s like spring football. There might be a day or two where we pull back a little bit, but that is going to be our mentality.”

In what has becoming a norm in Stoutland-run practices, the linemen were rewarded with passing drills towards the end of the session. Today, it was the offensive linemen versus the defensive linemen with the quarterbacks throwing them passes in the end zone.

Stoutland has said from the start that he wants the team to embrace having fun and enjoying themselves leading up to the bowl game.

“To me that is the whole point of this experience,” Stoutland said. `But I also think that if you are having fun and enjoying what you are doing, it usually leads to more success and more productive play.”

Futch Talks Position Change
Junior Jordan Futch spoke with the media about his recent position change from linebacker to tight end and the team’s enthusiasm at practice this weekend.

On moving to tight end…

“I feel like it is giving me more opportunity to play. When I was on the other side, I wasn’t getting the opportunity I wanted to.”

“This is permanent through the bowl and after that, it might just stay permanent,” Futch said. “I’m loving it, I’m enjoying it…I am having a good time.”

Futch caught a touchdown pass today from Spencer Whipple, and has been getting his fair share of reps alongside Richard Gordon, Asante Cleveland and Chase Ford.

As far as the team’s energy the last two days, Futch likes what he sees….

“We’re having fun. Guys are having fun with coach Stoutland and the rest of the coaches that are here right now. We are just enjoying what we have going on.”

Hankerson To Be Recognized at the BankUnited Center
Leonard Hankerson will receive the College Football Performance Awards 2010 Elite Wide Receiver Trophy during the first half of the men’s basketball game against Stetson today at 4 p.m.College Football Performance Awards Executive Director Brad Smith will be on hand to present the trophy to Hankerson, who earned the award after turning in one of the most productive seasons for a wide receiver in program history. The on-court recognition will come at the schedule media timeout with 4:00 to play in the first half.

Awards Ceremony is Tonight
The team’s 2010 Awards Ceremony will be held tonight at the new Robert and Judi Prokop Newman Alumni Center across from Alex Rodriguez Park. Current football staff and players will be on hand, along with fans and supporters of the program. Check back with HurricaneSports.com and TheUFootball.com tonight for the award winners.