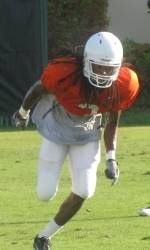 CORAL GABLES, Fla. – With fall camp already more than halfway over, intensity continued to rise on the Greentree Practice Fields as the `Canes held their 12th practice and opened their second two-a-day of camp Monday morning.

The offense had the advantage throughout most of the session that lasted about two hours under upper 80’s heat on the UM campus. The team focused mostly on red zone and blitz drills, with Jacory Harris, Travis Benjamin and Marcus Robinson among the individuals who stood out.

On the final Saturday before the start of the college football season, make sure you spend your day at the first-ever `Canes Carnivale taking place Saturday, Aug. 28, in the Basketball Field House and H-100 parking lot at the BankUnited Center on the UM campus in Coral Gables.

The event, which runs from 10 a.m. through 1 p.m., will feature a variety of activities for fans to enjoy while interacting with their favorite Hurricanes’ student-athletes from all UM sports. There will also be a number of other entertaining things to do, as well as food and drinks for all to enjoy.

Junior wide receiver Travis Benjamin had one of his best practices of camp Monday morning, catching a number of long passes from Jacory Harris, Alonzo Highsmith and Spencer Whipple. Among his receptions were a pair of deep connections from Harris in 7-on-7 and third down drills and a pass from Whipple down the right sideline for a big gain.

M-Rob Does His Thing Defensively

Travis Benjamin’s performance Monday morning might have been rivaled only by junior defensive end Marcus Robinson, who had to be the defensive star this morning. Robinson consistently worked his way into the backfield, picking up a couple sacks and at least four quarterback hurries. Robinson, who has eight sacks and 15 tackles for a loss in his career, is one of a number of talented players along the Hurricanes’ defensive line.

– Berry and Lamar Miller each broke off a long run on the outside during blitz drills.

– Jacory Harris hooked up with a number of receivers on deep passing patterns, including Travis Benjamin and Kendal Thompkins.

– Kevin Gaines and Sean Spence each recorded a pass break-up.

– Marcus Robinson turned in a stretch of three quarterback hurries in a five-play span during third down plays late in the session.

– Cory Nelms had a tackle for a loss, Allen Bailey had a quarterback hurry and Micanor Regis had a number of stops on runs up the middle.

University of Miami head football coach Randy Shannon has the highest Academic Progress Rate (APR) score among all head coaches in Bowl Championship Series Conferences. The APR was established by the NCAA to measure the success or failure of collegiate athletic teams in moving student-athletes towards graduation.

136 University of Miami student-athletes had a 3.0 GPA or higher following the Spring 2010 semester.

To order tickets for the 2010 season, call 1-800-GO-CANES or visit www.hurricanesports.com.