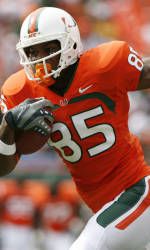 CORAL GABLES, Fla. – Senior wide receiver Leonard Hankerson has been named to the 2010 preseason watch list for the Biletnikoff Award, given annually to the nation’s top wide receiver by the Tallahassee Quarterback Club Foundation.

Hankerson is coming off one of the best seasons by a UM receiver since Andre Johnson in 2002. He led Miami with a career-high 801 receiving yards on a team-high 45 receptions in 2009 and was also the team leader with six receiving touchdowns. Hankerson started 12 of 13 games and was the only Hurricane receiver with a catch in all 13 games. He had a catch of 20 or more yards in 12 of 13 games which included three touchdown grabs of 20-plus yards. His 645 receiving yards in ACC games was the second-most in the league.

The Biletnikoff award is presented annually to the nation’s top college receiver and is named after Fred Biletnikoff, a standout receiver at Florida State in the 1960s and a Super Bowl MVP for the Oakland Raiders in the 1970s.