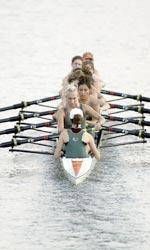 CORAL GABLES, Fla. – The University of Miami rowing team’s varsity eight crew finished with a time of 7:16.65 to take second place in the Grand Finals of the Cal Cup Sunday afternoon at the San Diego Crew Classic on the waters of Mission Bay in San Diego, Calif.

In what would be their slowest leg of the race, Miami was overtaken by UCLA to fall to third place at the half-way mark as 2003 Cal Cup runners-up Loyola Marymount moved into first place.

UM then mounted a surge to pull nearly seat-for-seat with UCLA before moving ahead by just .71 seconds at the 1500-meter mark.

The Hurricane crew distanced itself from the rest of the field down the final 500-meters with a split time of 1:48.47 but could not catch up to first place Loyola who crossed the finish line with a time of 7:12.70.

“I think we had a great day,” Head Coach Debra Morgan said. “We rode exactly how I thought we would and I think our team performed very well being under a good deal of stress.”

“I was pleased that we were able to finish ahead of Clemson and I was impressed with how we handled UCLA, a crew we had never seen before,” Morgan added. “We just couldn’t catch up with Loyola, but I was quite pleased with our performance today.”

The Hurricanes will return to the water April 10, traveling to Tampa, Fla. to take part in the Florida State Championships.